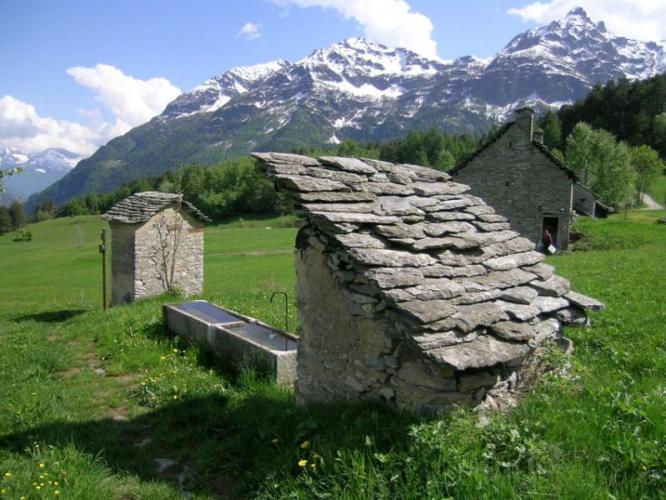 SEASON From May to October

Round trip exploring Trasquera and breathtaking views over the mountains of the Simplon pass.

The route starts from the car park of Varzo railway station and follows the tarmac road to San Domenico as far as Gebbo. From here, following footpath F36, you descends along an unmade path until you cross the River Cairasca and then climb until you cross the beginning of the Strada Vecchia (Old Road) for Trasquera. Take the beautiful wide mule track in the woods, almost all on the flat, which about 4 km further on intersects a road, which is first unmade and then tarmac, and finally drops to the central square of Trasquera. Continue in the direction of Bugliaga (either along the tarmac road or following the mule track that passes immediately above) until you reach the road junction for La Sotta. Follow the tarmac road to the pine forest and then climb to the holiday farm of Fraccia (just before it the detour to Salera on the unmade road which is not so steep is worth doing). When you get to the top and the grassland of Fraccia, where the track for Prato del Bosco starts, you continue downhill following the directions of the educational route along a wide tarmac track with some slightly steep stretches and pass through all the grassland. Then take a track on the left that returns to the point where the strada vecchia (old road) to Trasquera came out. Following the road previously taken you cycle downhill back to the centre of Trasquera. Then take the tarmac road in the direction of Varzo but when you come to the beautiful parish church of Trasquera take the delightful "Veia to Bröcc" stone paved mule track that drops directly to Bertonio di Varzo. At the Antica Osteria (Old Osteria) you then turn left through the roads of the town (via Galtarossa) and return toward the centre of Varzo and then to the railway station.