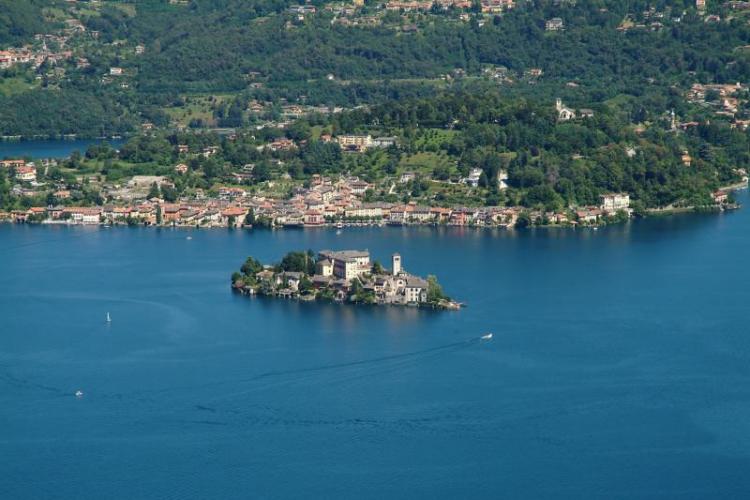 The starting point for this route is at Gozzano near Lido di Buccione, where the car can be parked conveniently.
You take via Canneti and follow the path which runs around the lake to the village of Lagna on alternating sections of unmade and tarmac road.
On arriving at Lagna, you pass the church of San Rocco on the right and then turn left passing a bridge until you come to the main road.
Turn right then a little further on at Prorio you can admire the old church of Saint Philibert. Climb behind the church, turn right along via Vignaccia and continue along the path keeping right. On reaching the parish church of S. Albino cross the bridge over the River Pellino and passing the cemetery on the left you head for the car park.
Now continue on the left toward Ronco Inferiore. Here the tarmac road ends, while on the left an ancient mule track (via Ronco Sopra) climbs and runs alongside the tiny cemetery bringing you to the village of Ronco Superiore soon after. ATTENTION: On some uphill sections cycling may not be possible.
Pass the Oratorio della Natività di Maria (Oratory of the Nativity of the Blessed Virgin Mary) on the left and continue straight on at the next crossroad (the left branch goes toward Colma).
After passing some isolated houses turn left at the next junction. Cycle alongside some dry walls until you see an abrupt turn off on the right which descends. ATTENTION: here too on some sections it may not be possible to cycle.
Follow the path downhill, pass the bridge over the Triver Qualba and climb up to the Oratorio della Madonna della Neve (Oratory of Our Lady of the Snow) in Valbai.
Cycle down to Oira at the church of Saint Sylvester where opposite the church you turn left into via Gobo and on coming to clearing turn left in the vicinity of the fountain. Go back into the woods keeping right at the first junction on a stretch where ATTENTION cycling is impossible. Continue over stream and keeping left you come to the houses of Brolo and then the provincial road.
Cross over the road and continue uphill along via Cologne and then via Canton Sopra. Pass the parish church and turn right into via Lavatoio reaching again the provincial road where you cross over and descend on the right.
At the end of the tarmac road you take a steep downhill path. Turning left and continuing on tarmac you come to via Erbera at Omegna. At this point turn right on via Fucine then right again on the Passaggio Primo Maggio passing the small bridge over the River Fiumetta.
Pass in front of the church of Saint Bernardino of Siena and then turn right along via Rosselli. At the roundabout turn left still following via Fratelli Rosselli. Continue alongside the lake until you come to the centre of Omegna in Viale Garibaldi. Shortly after the bridge next to the town hall, turn left and follow the walkway over the River Nigoglia to the park of the Forum.
Exiting from the Forum, turn right on via Manzoni and then left following first via Pacinotti and then via Repubblica. Pass the railway station of Omegna on the right and continue to Borca.
On reaching the church of San Gottardo di Borca take an uphill path into the woods and follow this trail until it reaches the first houses of Crabbia.
At the beginning of the tarmac road turn left and continue to climb to via ai Monti. The tarmac road turns into a path that takes you into the woods. On some sections cycling is impossible.
At the next junction keep right and continue straight ahead, going downhill and reaching Pratolungo at the church of the Madonna della Neve (Our lady iof the Snow). Here you turn right downhill, following via Prea Coarse in the direction of Pettenasco.
Pass under the railway viaduct of the Novara - Domodossola line and turn left past the bridge over the River Pescone. Now turn right in the direction of Carcegna.
On reaching the centre of the town at the church of S. Peter turn into via delle Scuole. Go down on the right near a small wall following the path up to the steps that then go back in the woods.
Turn left and continue uphill along the path to the first houses of Miasino and near the garden wall of Villa Nigra.
Now turn right alongside the garden wall of the Villa. At the stop sign turn right again and continue downhill on a tarmac road. After a few hundred metres turn right downhill along an unmade track which after some hairpin bends will take you to Legro along via vecchia Miasino. On reaching the railway station of Orta-Miasino continue until you come to the strada della Prisciola which will take you to the church of Saint Stephen in Corconio.
Pass under the church and following via Valle continue between the houses of the village up to the beginning of the path on the left signposted Torre di Buccione.
Climb up the path that runs alongside the ballast of the Novara - Domodossola railway line on reaching the bridge on the railway line in via Cave turn right and continue on the tarmac road. Immediately after the left bend take the unmade road which climbs toward Bolzano Novarese. Continue on to via Colonico and turn right down to the crossroads with the provincial road SP 229 of Lake Orta.
Continue now on the right descending down to Lido di Buccione on the unmade road of via Fransisca and the starting point of our route.