a - BIKE - n.2: CYCLE PATH OF TOCE, cycling around the villages 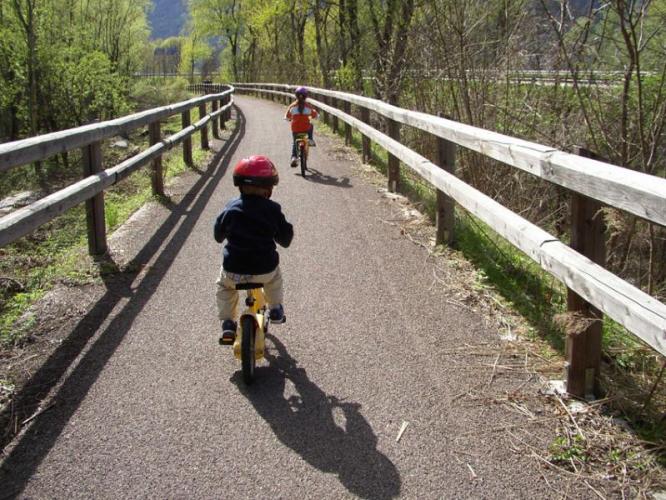 The route starts from Domodossola, the ancient capital of the high Ossola valley with a well-preserved town centre and the subject of important restoration projects (the so-called Borgo della Cultura or Village of Culture), and reaches Vogogna, the capital of the low Ossola valley, included in the list of 217 "most beautiful villages of Italy" (www.borghitalia.it), with an architectural design of a fourteenth century medieval village. Vogogna has also been awarded the Orange Flag by the Touring Club of Italy (www.bandierearancioni.it).

The route starts from Domodossola station and after reaching area of Badulerio on normal roads it joins the cycle paths on the left bank of the Toce as you look downstream. After passing the sports field in Villadossola you continue to a bridge over the canal. After the bridge you leave the cycle path, turn right and immediately turn left to follow the wide road in the industrial estate to the roundabout of the cemetery. Turn left and follow the road of the motorway exit but before going that far turn right to cross the River Ovesca on the new road bridge. From the bridge a bicycle lane drops to a roundabout, turn left over a canal and continue on an unmade road which at the beginning seems to go back until you pass under the motorway bypassing the autogrill area. After crossing the lawn in front of the autogrill you join the cycle path again which continues to the sports field of Pallanzeno. Cross the bridge over the canal and take the little tarmac road on the left parallel to the canal, you will pass over the railway lines and immediately after cross over the provincial road. Cross over very paying a lot of attention to the traffic then continue on a short stretch of unmade road and then take a tarmac road that runs alongside the railway line. You will pass the sports field and the cemetery of Piedimulera as far as the road that skirts the River Anza which comes down from Macugnaga. Turn right and go straight on to the bridge over the River Anza. After the bridge turn left along the river and bypass the industrial estate. From here there are several unmade roads (with very bumpy surfaces) that pass through the grasslands of Pieve Vergonte or run alongside the River Anza and which at the end reach the railway station area of Pieve Vergonte and the bridge for Vogogna. A more direct tarmac road, but with very light traffic, runs along the railway line. From the station of Pieve Vergonte take the bridge over the River Toce. At the end of the descent, after the bridge, turn immediately left, you turn back (Via Passerella) and pass under the bridge to take a beautiful track that runs along the top of the embankment of the Toce for more than 1 km. Then continue left parallel to the river that crosses Vogogna to the historical centre of the town or the railway station.