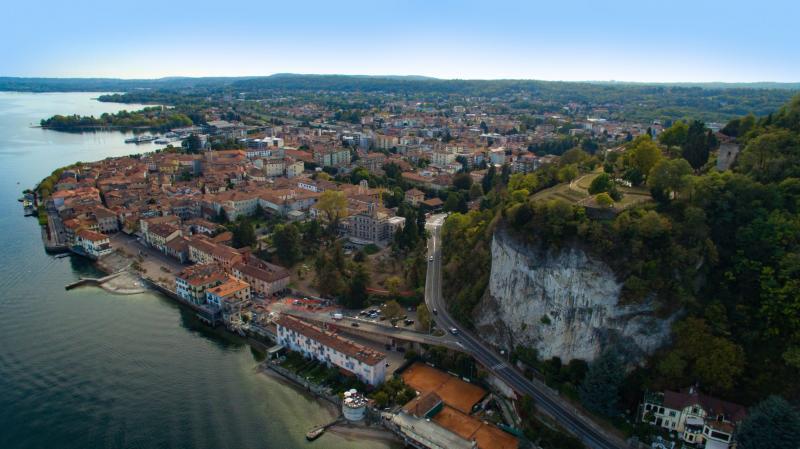 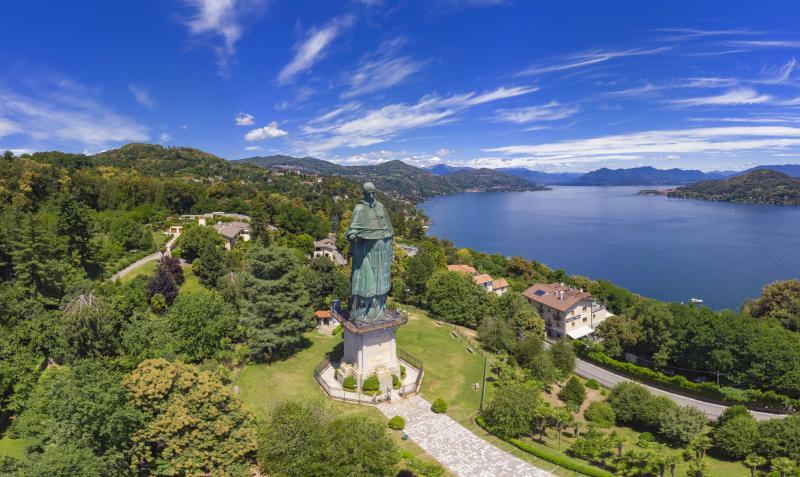 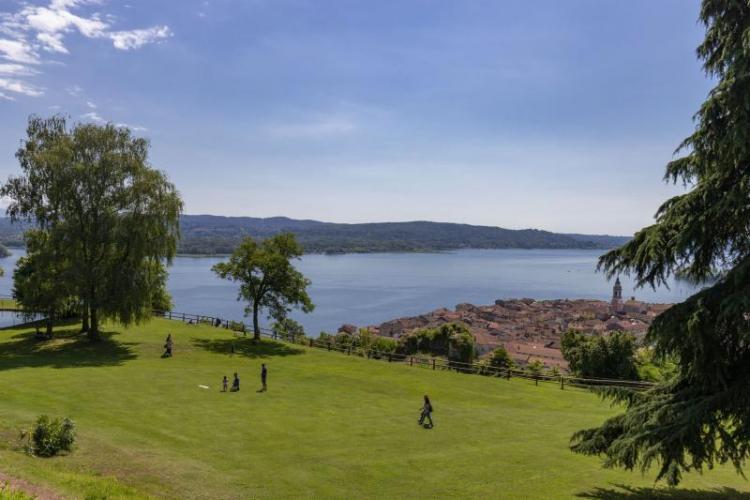 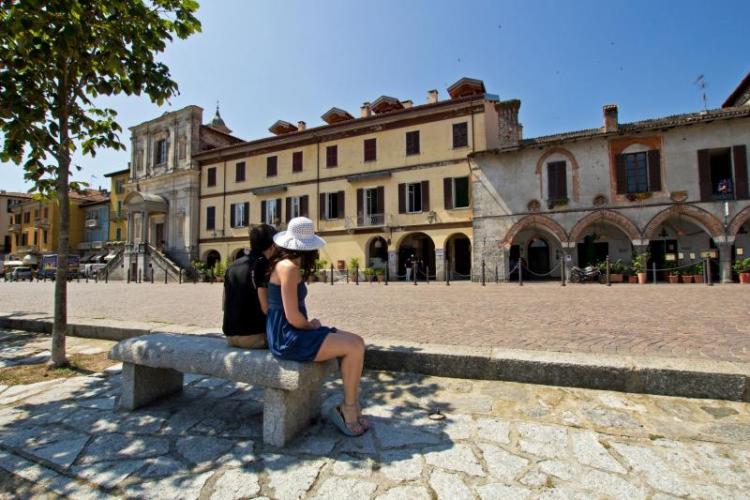 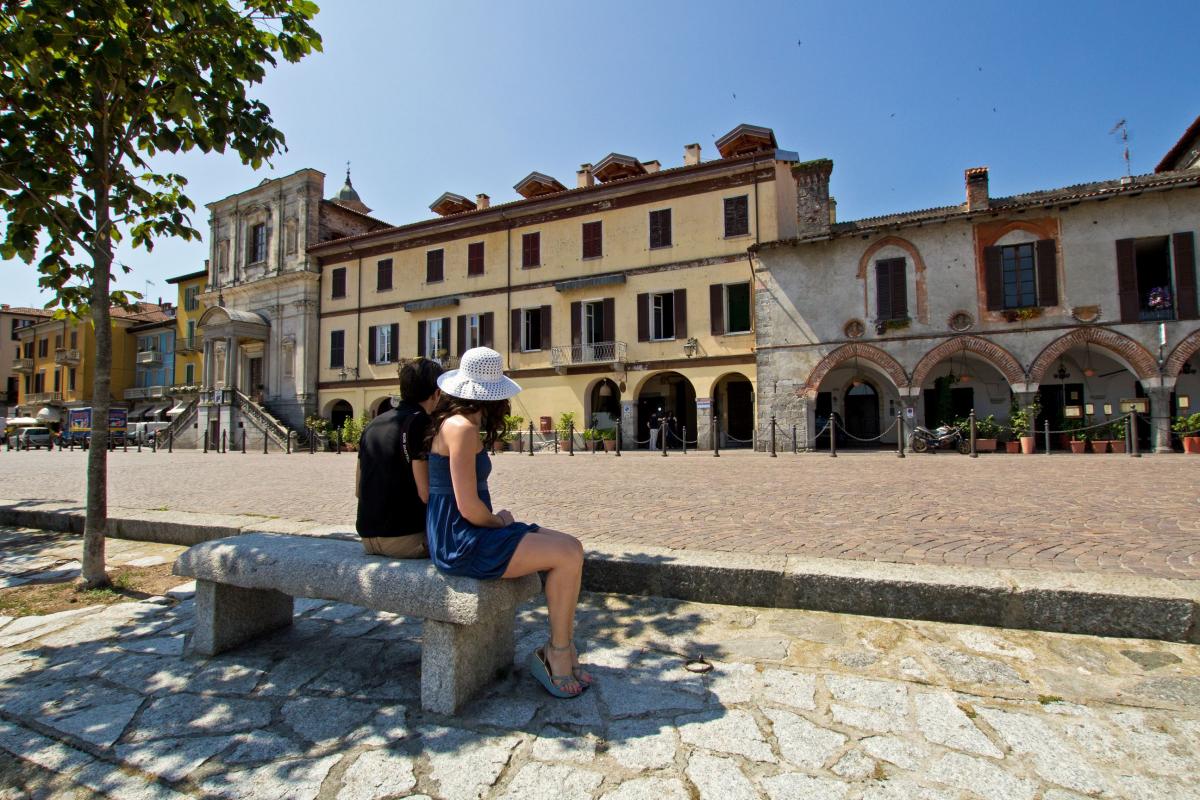 THE VILLAGE: CHEST OF CULTURE, TRADITIONS AND NATURE
A beautiful and multifaceted town on the Piedmont shore south of Lake Maggiore, Arona, known for its magnificent landscapes, elegant shops and fashionable clubs, is known throughout the world as the birthplace of San Carlo Borromeo.
Among the main places of interest is the colossal statue of San Carlo Borromeo, completed in 1698 and called "San Carlone" by the people of Arone. The construction techniques used were later taken up for the Statue of Liberty. The statue has a total height of 35.10 metres, can be visited inside and offers a splendid panorama from the top. Next to the statue is the church dedicated to San Carlo, which houses the "Room of the Three Lakes".
To the north of the town, on a rocky spur, are the remains of the Rocca Borromea of Arona, whose foundation may date back to the late Roman Empire. From the 12th century the area passed into the hands of the Lords of Milan and from 1439 it became the property of the Borromeo family. On 2 October 1538, San Carlo Borromeo was born in the so-called "Room of the Three Lakes". The remains of the room are still visible. In 1800 Napoleon ordered the destruction of the fortress. In 1807 the area returned to the Borromeo estates. The site is now a beautiful public park, with the remains of the castle and an incomparable view of the lake and the town below.
To get to know the historic centre, we can start from Corso Cavour, a pedestrian area full of shops where you can admire the Church of Saints Anna and Gioacchino, dating to the 18th century. The "Budello" leads to Piazza del Popolo, the old market square. The old Palace of Justice, called "Broletto", is located here. The Church of Santa Marta (or Santa Maria di Loreto), built in 1592, overlooks the square. Inside there is a reproduction of the Holy House of Loreto. Leaving Piazza del Popolo and going up towards the upper part of the town, we pass Via Pertossi and reach Via S. Carlo where we find Villa Ponti, one of the most elegant residences in Arona and, opposite, the Monastero della Visitazione with the Church of Ss. Trinità and the Borromeo Palace. In Via San Carlo there is also the Church of S. Giuseppe and the Collegiate Church of the Nativity of the Virgin Mary (the parish church): consecrated in 1488, it is in late-Gothic style and houses the polyptych of the Nativity of Mary by Gaudenzio Ferrari, paintings by Morazzone and a beautiful organ. Archaeological finds from Roman times can be found in the rectory. Next to the Collegiate Church is the Beolchi Ossuary Chapel, built in 1683, with floral wrought-iron grilles and allegorical frescoes. The descent to Piazza San Graziano is a must. There you can admire the Church of SS. Martiri, dating back to the 10th century, with a Gothic interior and Baroque façade and hosting the relics of the martyred saints Carpoforo, Fedele, Graziano and Felino, as well as important works of art. The square is also home to the Monastero della Purificazione, now home to the Civic Library, and the Archaeological Museum, which houses the cast of the famous wheel of the Lagoni of Mercurago, a UNESCO World Heritage Site and a prehistoric pile-dwelling site in the Alps.
The tour of the town is completed with a walk along the lakefront to admire, among others, the Borromean walls and the monument to the Boatman. For a bit of relaxation, a stop in the green areas around the lake is a must.
The Hobbyists' Market, the Antiques Market and the Farmers' Market are very characteristic.
Arona is also one of the main stages of the Lago Maggiore Marathon (period: November).

Typical food and wine
On Lake Maggiore, the protagonist is freshwater fish. Trout, baked in foil and flavoured with sage and rosemary leaves, perch and whitefish, usually fried or presented "in carpione", pike, char, gardon and bleak. The honey from the associations "Agripiemonte Miele", "Aspromiele" and "Consorzio Tutela e Garanzia Mieli del VCO" is also produced in different varieties.
The "Blu Frutti" producers' association grows small fruits (strawberries, raspberries, blueberries and currants) on the shores of Lake Maggiore and in the hills around Arona. Seedlings grow optimally here thanks to careful work in the greenhouse and compliance with the Association's quality standards. These fruits are used to make sweets and delicious jams that can be purchased at local markets.

Accessibility'
The route along the lake is very easily accessible for people with reduced mobility.
Recommended "For all" route: Arona: Arona
(info and details: www.distrettolaghi.it/en/percorsi)

Handicrafts
The production of flowers typical of Lake Maggiore, with particular reference to the Alto Vergante hills above Arona, concerns the excellent cultivation of azaleas, rhododendrons and camellias. It is characterised by the high quality standard of its flower production and represents the conscious evolution of a tradition from a spontaneous vocation to a highly specialised activity, making the western part of the lake a true flower-growing district.