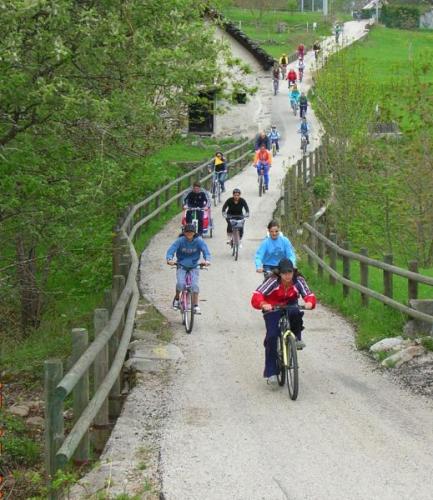 SEASON From April to October

The Vigezzo Valley is a unlike any other valley of Ossola. It is a corridor between Ossola and Ticino, without a beginning or an end, a vast plateau at 800 m altitude covered with forests. The valley recounts the legend of the chimney sweeps and an artistic tradition of great painting that has earned Vigezzo the nickname of "valley of painters".

In the valley there are 15 signposted pedestrian/cycle routes of which a small part use cycle paths and the rest use farm tracks or existing roads. Described below is the main route n. 1 Druogno Route - Re "Pineta".

This is the itinerary par excellence in the Vigezzo Valley since it has an almost continuous cycle path except for a short stretch on a secondary road with low traffic before the sports field of Santa Maria Maggiore and when crossing the town of Malesco. The route starts from the station of Druogno and passes through the "pine wood" to Santa Maria Maggiore skirting the foot of the slope passing through the Centro del Fondo (cross country skiing centre) and the sports field in Praudina. Then continue, still on the level, until you cross the River Loana at the waterfall of Pozzo Vecchio and then go down to the centre of Malesco. Taking the internal streets you cross the village and continue eastward until you drop to the wide bridge that crosses the River Melezzo Orientale. After the bridge you turn right alongside the river until you arrive at the foot of the village of Re, then cross the river again over the bridge, turn left immediately and continue as far as the beautiful stone bridge of Pozzo Maglione. From here you can go back on a small road until you meet the main road and finish the route at the Santuario di Re (Santurary of Re).

In the Vigezzo Valley there is an innovative automatic bicycle rental system: Vigezzoinbici. Those who arrive in the valley by train or by car can use a bicycle to get about easily and freely.
At 4 points in the valley, in the vicinity of the railway stations of Druogno, Santa Maria Maggiore, Malesco and Re, there are places where you can pick up a bicycle using an electronic card.
The bicycle can also be returned at a different place from where it was taken so that cycling can be combined with other forms of transport.
For information on how the rental service works and the cost please contact:
Lepontina Gestioni Srl - Piazza della Chiesa Druogno c/o Tourist Information Office in Druogno (Tel. 0324 93565 Or 348 0303696) in the opening hours of the offices.