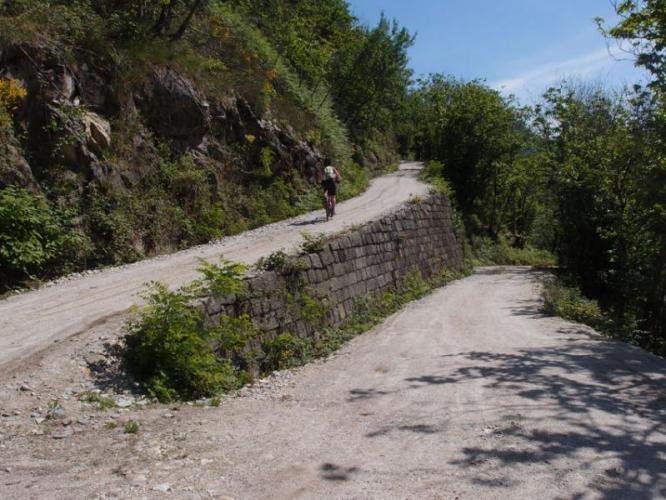 A round trip exploring the Cadorna Line the system of military fortifications built along the Swiss-Italian border during the First World War. The defensive line was to defend the access route through the Val d'Ossola at its narrowest point, in front of the Punta di Migiandone. On Mount Orfano there was once the Command Post. There were plans to build a fort here with a concrete rook containing rotating metal domes but the works were never completed. The heavy vehicles access road, recently recovered, is now and ideal route for an excursion by mountain bike.

The route starts from the sports field of Mergozzo. Following the signs in the In Bici tra i fiori (cycling through the flowers) route you continue along the cycle path and come to Prato Michelaccio. After a short stretch in a tarmac road you come to the beginning of the unmade military road to Mount Orfano which climbs with moderate slope and wide hairpin bends. After passing the branch off to Mergozzo you soon come to the area of the Polveriera, a stone and concrete building to keep explosives protected from moisture. The panorama over Lake Maggiore and the plain of Gravellona is magnificent. From here the route toward the top of Mount Orfano becomes demanding along the military mule track that climbs with narrow hairpin bends. For the descent you retrace your route back to the area of the powder store and continued along the military road which climbs to the turn off to Mergozzo (Path A58, before the barracks). The first section is a sheep track with very rough surface. After passing a quarry (of green granite) you turn right and continue along the path which goes steeply through the forest up to Mergozzo with some rather tough stretches because of the slope and the numerous obstacles.