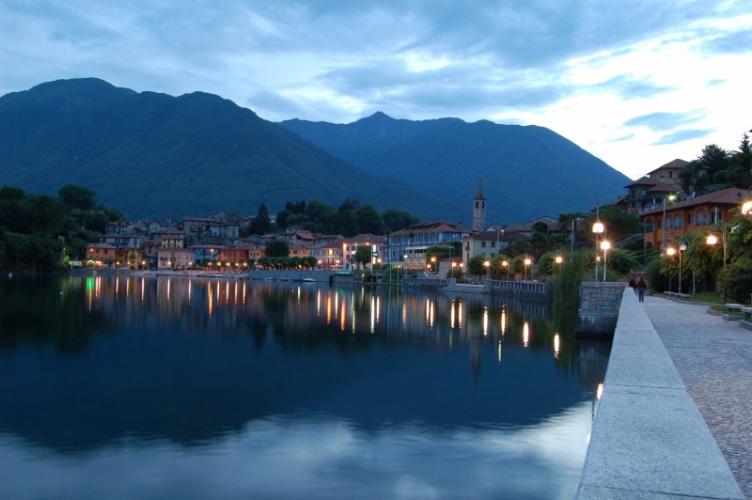 In ancient times, this tiny lake was a gulf of Lake Maggiore. Now it is one of the cleanest lakes in Italy, since many years ago the use of engine boats was forbidden. Consequently at present its waters are considered a paradise for practising water sports. The village of Mergozzo looks down on to the lake. Its houses, typically made in Ossola stone, rest one against the other and are occasionally divided by steep streets that often turn into stairs. Pictoresque alleys lead to the village square, where an old elm grows under which the village magistrates used to sit as far back as 17th century. This village also has religious buildings, many of them dating back to the Romanesque period. Among these, there is Saint Martha's Oratory (Oratorio di Santa Marta), seemingly built the first time in the 9th century, restored in 1130 and partly modified in 18th century, the church of Our Lady of the Assumption, and St. Mary's Church in the country ward of Bracchio. Mergozzo, however, accomodated more ancient settlements and now we can see evidence of them in the Antiquarium, a museum hosted in the Preacher's House (Casa del Predicatore). In these rooms there are items dating back to pre-history, the Bronze Age and Roman Age; many of them were found in local necropolises. Mergozzo granites, in white and green, belong to Italy's architectural history. For example, the columns of the church of San Paolo fuori le Mura in Rome and the marble used in building the Cathedral (Duomo) of Milan were taken from the famous quarries of Candoglia, still operative today. From the village square, a signed path will accompany you on to an outing of artistic interest. After about one hour walk along a medieval mule-track, you reach the small village of Montorfano, laying amidst chestnut woods and proudly featuring the most interesting and best preserved Romanesque church in this area (11th-12th centuries). This cruciform building, dedicated to St. John the Baptist, was made using marble coming from the nearby mount Montorfano. This name, sounding like "orphan mount" in Italian, was given to the mount for its standing alone close to the Lake Mergozzo. Inside and outside the church, recent archeological excavations brought to light traces of previous buildings that can be dated back to 5th-6th- and 9th centuries. At a short distance there is a suggstive lookout point, from where the visitor enjoys a wide view of the Borromeo gulf, the estuary of the River Toce and the special natural sanctuary for the preservation of Fondotoce canebrakes. Another pleasant outing will bring you on a military mule-track starting from a bridge on the River Toce, near the road-fork to Mergozzo, and then up to the peak of the mount Montorfano. This is an all-around walk that allows you to discovery a section of the historical Cadorna line.