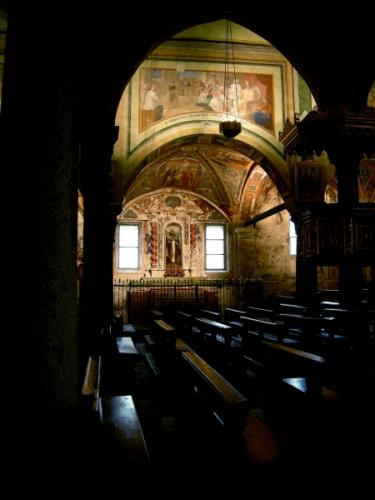 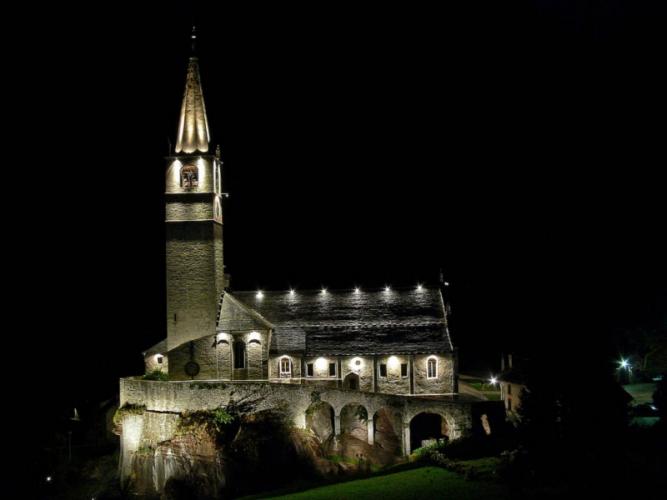 The parish church of S. Gaudenzio, which was made a national monument, rises majestically on the rocky spur that dominates the Silogno Gorge, in the agricultural centre of Baceno. The importance of the centre stems from the fact that it is located in the spot where the valleys converge: Antigorio and Formazza on the right and Devero on the left. The importance of the village grew during the 13th century, during which period numerous extensions were also made to the parish church. Evidence of the church's existence is already found in a document dating back to 1039, when the building was a chapel. In the 12th century it was then incorporated into the current central nave.

The side aisles were added to the Romanesque-style Church between the end of thirteen hundreds and the first half of the fifteen hundreds. The completion of the distinctive bell tower on the other hand dates back to 1523. The prestige of the building is emphasized by the rose window above the main entrance (1505), the numerous frescoes (which include the Ecce Homo dating back to 1509) and the splendid paintings of the presbytery (the Crucifixion and the Dragon and the Apocalypse, which date back to 1542 and are found in the vault). Located on the back wall of the apse one finds a wooden sculpture, a real work of art, characterizing the high altar. The church sustained a great loss with the sale of the impressive stain-glass depicting the twelve Apostles.

The works of art kept in the church include the enormous S. Cristoforo, a work by Antonio Zanetti called "il Bugnante", which dates back to 1542. Looking at the high altar, one sees two knights depicted next to the cross. Tradition has it that they are Gaspare and Baldassare Rodis-Baceno, (the last descendents of the family) who commissioned the work to complete the colossal bell tower (one of the more impressive in Ossola and second only to that of Montecrestese).