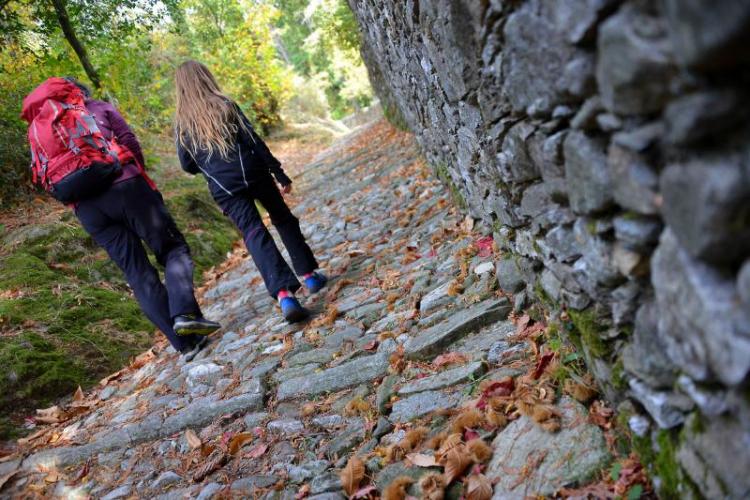 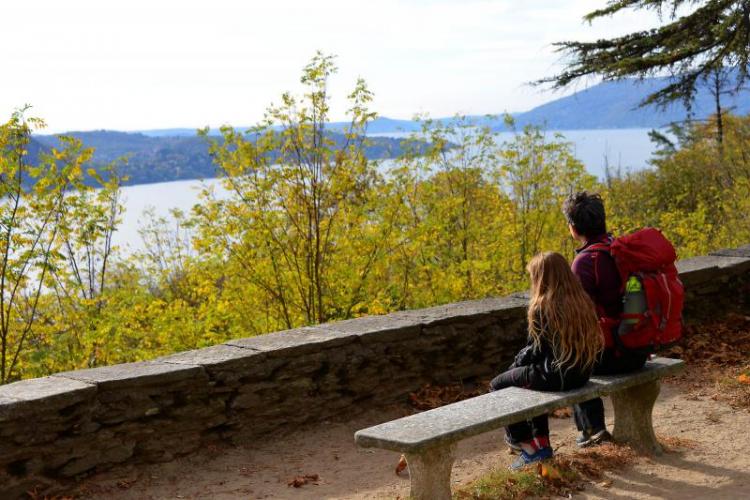 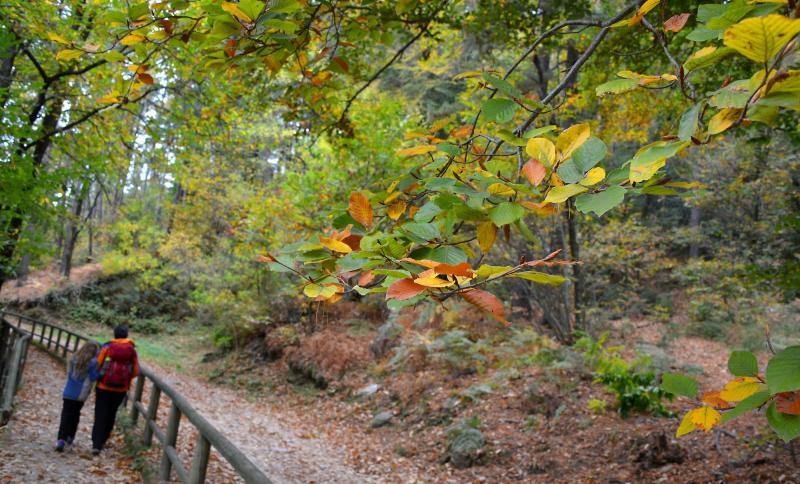 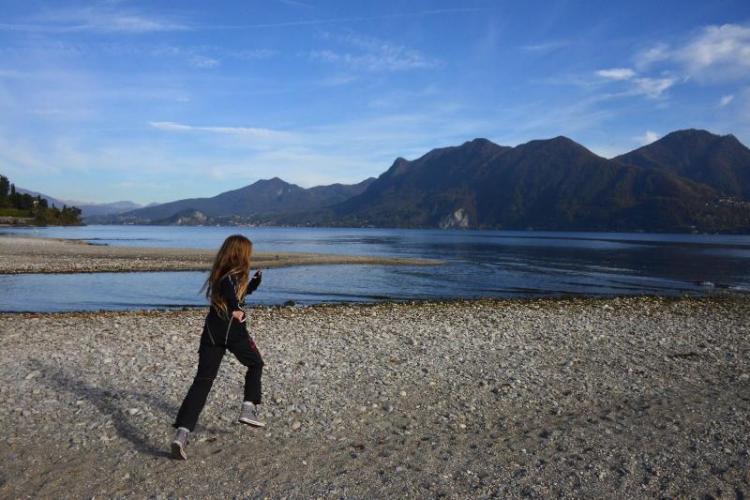 Like the ancient pilgrims, we walk along the mule track that climbs from the lake shores up to one of the Sacri Monti of Piedmont and Lombardy, UNESCO World Heritage Site since 2003, from the glittering water to the thick chestnut forests.

From the landing stage, walk along the lakeside for a stretch, with the water to your right, until you are in front of the Santa Croce church. Climbing up the stairs to the right, you will arrive at a playground area with tables and benches. On the left, instead, the trail climbs in Via Ai Motti and following it to the right, you come to an intersection of three roads.

If you leave your car in the free parking, just take the staircase at the beginning of the parking area and that leads to a small oratory. Then it in the alleyway and you will arrive at the same intersection.

Go up the hill (to the left for those arriving from the landing station and to the right for those coming from the parking lot) along the narrow Via Nigra until you arrive on the asphalt road Via Marconi. Go to the right, uphill.

This road is very narrow, and traffic runs one way uphill. You must be careful of possible passing cars.

It meets a wider road, Via Risorgimento, in the hamlet of Ronco. The journey continues along the staircase located a little later, on the left, but before getting there, we recommend going forward a few meters to admire the little church with the stone façade that is part of the nearby convent.

Since 1906, the Monastery of the Most Holy Trinity has hosted around fifty Benedictine Sisters of Perpetual Adoration of the Most Holy Sacrament. If you enter the church, be respectful: at all times during the day and night, at least one nun is present and busy praying.

From the church, go back to the uphill path along the staircase that leads to the church of Ronco and Piazza Fontane. You will pass near the sacred building and at the T-crossing behind you on the left, take Via Torino (an old half faded sign says "Al Santuario") and then immediately after that, take Via Careghetta on the right. The road is very narrow, and climbs to another T-junction. Here, take the wider cobblestone road to the right, which finally goes into the woods. Once you are in the woods, you will find another junction. Memorise this point, since both tracks are correct. We suggest that you continue straight. You will come back on the path on the right. Therefore, continues on the cobblestone road (slippery in the event of rain) climbing rapidly until you arrive at a new cobblestone pavement. Follow it to the right to ascend to the buildings of the Sacro Monte.

Already in ancient times, there was an oratory here, built in the 12th and 13th century and dedicated to the Holy Trinity. In 1591, this building is mentioned and you can see it still today inside the nave of the present church, on the left. There, you will find the fresco depicting the figure of Christ three times (a symbol of the Trinity: three persons, equal but different). Between the 16th and 17th centuries, the site was extended with the creation of the Sacro Monte, formed by the church of the Holy Trinity (1617) and the chapels of the Coronation of the Virgin (1647), St. John the Baptist (1659) and Abraham (1703), in addition to a portico which shelters a Via Crucis of 1752, closed on one side by a small chapel.

Now, follow the path for disabled visitors that passes in front of the portico of the Via Crucis and leads to covered picnic area with tables and a fountain. The open space around the sacred buildings lends itself to free play of children (but careful to not make too much noise!) and there are no dangerous elements.

The forest above the Sacro Monte has been a Special Natural Reserve since 1987.

After your well-deserved snack or lunch break, continue along the trail marked by didactic panels (white signs say "Cappella del Porale e Caronio") and in the first part, you are still on the trail for the disabled next to the dirt road. Then you abandon that trail and take the dirt road on the right uphill (signs for "Pollino"). You can travel the entire dirt road or, alternatively, take a steep “short cut” on the left. Both routes converge at the same point just before the junction to return to the Sacro Monte. Before you continue, however, we invite you to go a few more meters in the direction of "Pollino" to reach the small chapel, the Cappella del Porale (1797), immersed in the cool forest. Then, go back to the crossroads previously mentioned in the description, and take the wide track that winds into the beautiful forest of chestnut trees. It is practically flat and, a little further back, is the road you took at the beginning. You will meet a single junction, but it is sufficient to keep on wider flat track to arrive, after a slight downhill segment, at a small power plant.

Here, on the left, you will find the beginning of a path, “Percorso Vita”, less than a kilometre in length, that leads to eighteen physical exercises to perform with equipment or just your own body weight.

Continue on the right, passing next to the power plant building, and then steep footpath with steps leading back down to the Sacro Monte (signs for SS. Trinità and red/white marks). You will once again pass next to the Portico of the Via Crucis and the chapel of Saint John the Baptist, and take the trail on the left (signs for "Cappella di Abramo" that lead you to descend along a path that touches the asphalted road and then leads to the chapel of the Patriarch Abraham, which is slightly farther away with respect to other buildings of Sacro Monte. Continues beyond the chapel to take the cobblestone trail (signs for "Ghiffa") which soon leads to the junction you already passed on the way up. From here, descend along the path travelled at the start and if you can, stop to explore the characteristic narrow winding streets that form the old centre of Ghiffa, and that unfold behind the church, such as Via Ai Motti, Via Alessandro Volta, Via Soccorso and Via Taccioli.

Hat Museum
From 1881 to 1981, the town of Ghiffa was the location of a thriving hat factory called Panizza, which made felt hats, and still produces hats even though it has moved to Tuscany (www.panizza1879.com). Today, the factory building has been transformed into a residence but two rooms house a museum that presents the art of hat making, with machinery on display along with photographs, period prints and videos (www.museodellartedelcappello.it).

A simple excursion that presents no difficulties. If you have children in strollers, you drive up to the Sacro Monte and take the path for disabled visitors. The playground area behind is the parish church of Ghiffa, while the Sacro Monte area offers stones to climb and trees to hide behind, and the “Percorso Vita” exercise trail offers new ideas for letting small hikers work off extra energy.