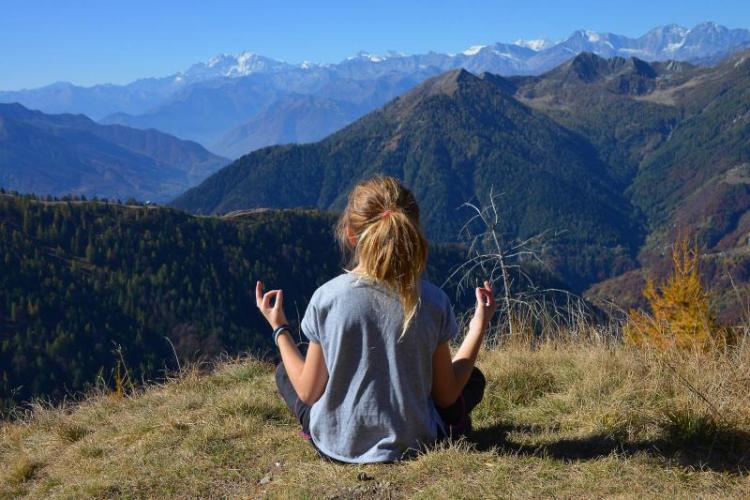 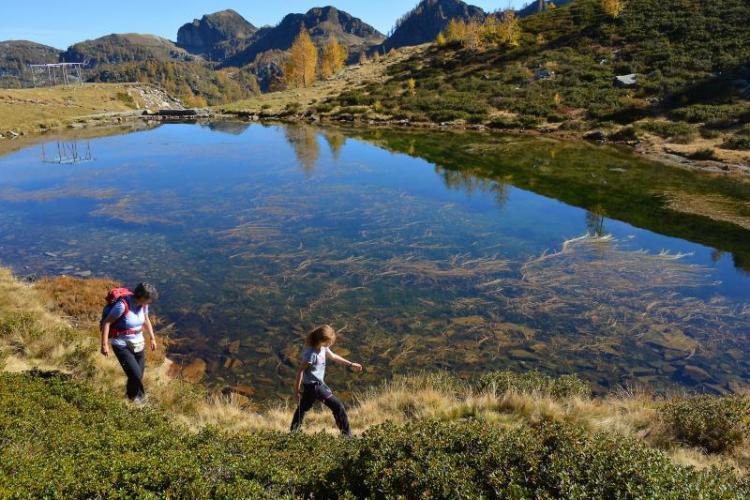 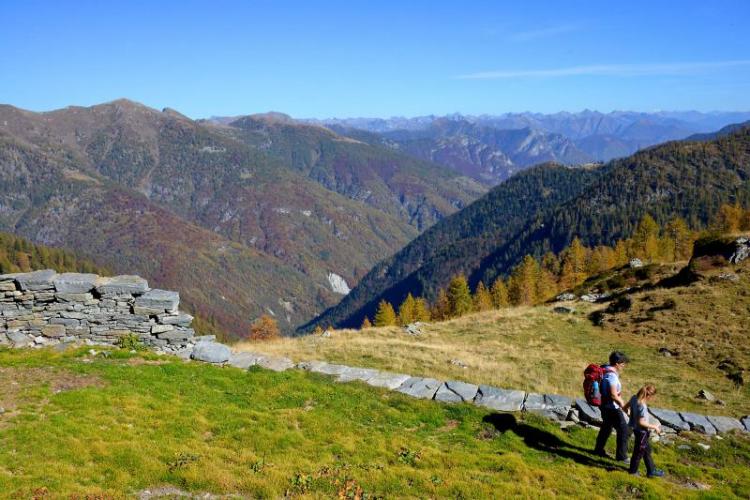 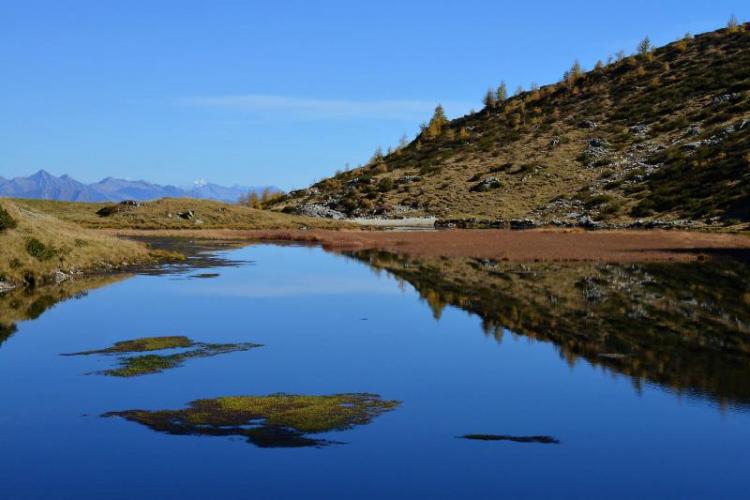 A walk at a certain altitude in a severe high mountain environment with spectacular panoramas, in search of the secret inhabitant of Muino.

In ten minutes, the Prestinone cable way will take you from 825 to 1726 meters at Piana di Vigezzo, a difference in altitude of 901 meters. Leaving the station, with the cable way facilities behind you, stop for a moment to admire the panorama that opens from the meadow in front of the houses. Then take a left after passing between the houses (red/white sigh "GTA L.tti Muino M25"). The wide stony dirt road starts climbing decisively and becomes steep. A short detour on the left leads to a fountain. A second fountain is located in a little further up, near some wooden tables. After these, the dirt road becomes slightly more gradual and abandons itself to a net curve to go toward the left, along a footpath (red/white sign for L.tti Muino M25"), which continues to climb steadily and continuously, without interruption, until it brings you to Bocchetta di Muino (1974 m) characterized by a votive pillar and a wooden statue dedicated to smugglers ("spalloni").

The "spalloni" were smugglers who went back and forth across the Alps between Switzerland and Italy, introducing different products illegally (from salt to cigarettes, depending on the time period). However, they have taken on a romantic aura because although they ran an illegal business, they literally helped the populations of the border to survive.

The climb is finished, and the trail goes downhill beyond Bocchetta di Muino continuing in the Onsernone Valley along the downhill path (red/white sign for "M25 L.tti Muino") that goes much more uphill from Alpe Canva (note the curious shape of the higher building: this is an avalanche barrier), and dramatically changing environment since you are going from areas planted with trees to large mountain grasslands right before the first of the lakes (1922 m).

If you pay a little attention, it is possible to walk around the whole perimeter of the lake and, especially toward the area furthest from the path, you can see many frogs that populate the area while the tadpoles prefer the area closest to the trail.

After passing the lake, go towards the refuge bivouac of CAI Vigezzo, continuing beyond, the trail is now flat and soon leads to Alpe Ruggia (1880 m) and the second lake, larger than the first and usually full of vegetation that is transforming it into a peat bog.

Vigezzo valley
A unique valley in the Ossola area that extends from west to east. It has an average altitude of 800 meters, and is very wide and gradual, and lends itself well to “horizontal” sports such cross country skiing or dog sledding. It is called the "Valley of Painters" for its well-rooted painting traditions. Starting in the second half of the 17th century until the 19th century, artists from this area left to paint all over Europe. A well-illustrated story is proven by the presence, in Santa Maria Maggiore, of the Art School founded by the painter Rossetti Valentini, who made sure it was free to teach anyone the basics of painting. But there is also a history of hard physical work, such as the profession of the chimney sweeps that also came from this valley. Many were children, and they travelled afar to work. They are remembered in the Museum of the Chimney Sweep, at Santa Maria Maggiore (www.museospazzacamino.it; www.santamariamaggiore.info; www.comunesantamariamaggiore.vb.it). Today, the valley is known mainly for the tourist train Vigezzina-Centovalli that connects Domodossola to Locarno in Switzerland. The journey is unforgettable! The Vigezzo valley, through the town of Malesco and the Loana valley, is also one door to Val Grande National Park, the largest wilderness area in Italy, wild and isolated. You should try these paths only if your are good shape. Families can get a taste of this large park through some nature trails (www.parcovalgrande.it).

An easy walk, that presents no particular difficulties except for the steep initial climb on the dirt road, which small hikers could find a little boring. "Boredom" will soon be forgotten at the two small lakes where tadpoles and frogs swim. Not suitable for pushchairs.