Lake Maggiore, Lake Orta, Lake Mergozzo and Ossola Valleys: on a romantic getaway in the Piedmont Lakes for a modern Dolce Vita! 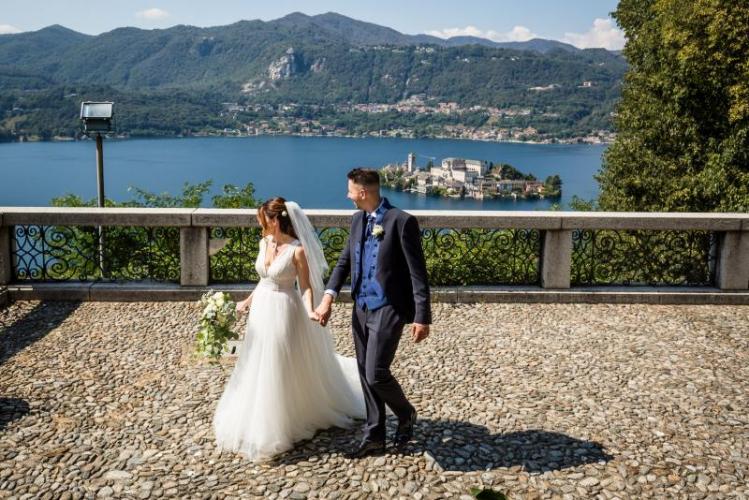 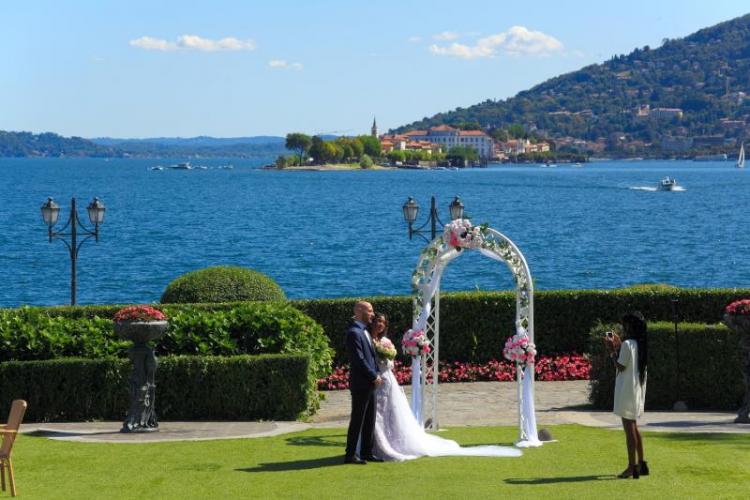 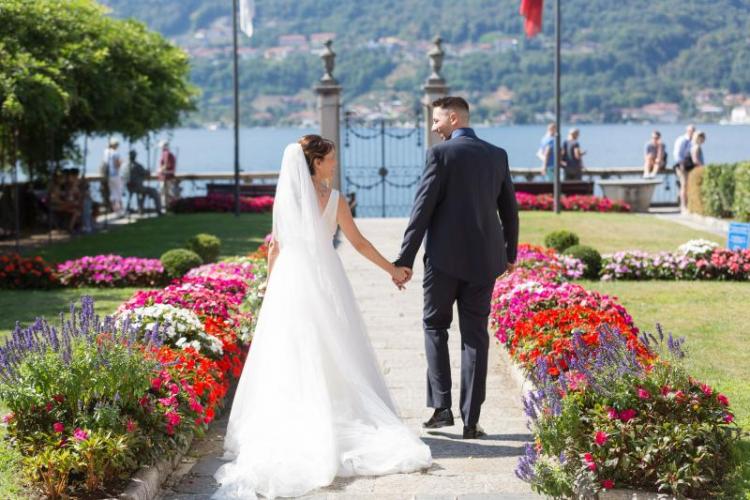 Idyllic landscapes, so different and yet so close
On this journey we start, with love, from here. Lake Maggiore, la Dolce Vita: Thanks to authentic marvels such as the Borromean Islands, the shores shrouded in greenery, the pleasant climate, the Belle Époque grand hotels and the residences of illustrious personalities of the past, it has been a source of inspiration for writers, artists and musicians from all over Europe, who made it a favourite destination of the Grand Tour. Lake Orta, romance and spirituality: A treasure trove of nature, art and faith described in the works of writers such as Balzac, Rodari, Montale and Soldati. In modern times, the cradle of the great names in "made in Italy" housewares and design. Lake Mergozzo, the little one: A peaceful corner just a few kilometres from Lake Maggiore, small yes, but which over the centuries to this day has been able to donate its splendid marble for the construction and conservation of Milan’s Cathedral. Ossola Valleys, the Alps: Villages, peaks, pastures and forests to be explored all year round on foot or by bicycle, where authentic "slow food" - local cured meats, cheeses and wines - offers joys of taste that must be tried. In little more than an hour from the pleasant lake shores with their Mediterranean-like climate to Monte Rosa, the second highest mountain in the Alps! Enchanting landscapes and famous attractions have always exerted great appeal: with over 3.7 million visitors a year, 79% foreigners (source: Osservatorio Regionale del Turismo - Year 2019), the Lake Maggiore region is one of the most important tourist destinations in northern Italy and the first in Piedmont in terms of foreign visitors. Italy, Germany, France, the Netherlands, Switzerland, the UK and the USA are the main traditional markets for the area, for both individual tourists and organised groups. 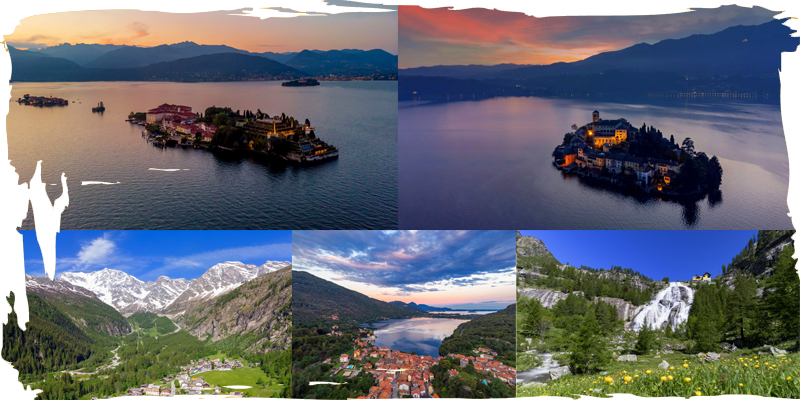 Between the Lakes and the Alps of Upper Piedmont the Wedding Day evolves into a Wedding Experience
Increasingly, this area is one of the leading wedding locations in Piedmont: from the wedding ceremony to the reception, the bride and groom are offered a winning combination of marvellous venues, such as medieval and baroque churches, UNESCO World Heritage Sacred Mountains, grand hotels and period residences, and highly professional hospitality services. The scenic variety of the destination allows couples who choose the Lakes for their big day (or for a romantic getaway) to also enjoy slow-paced experiences between the Lakes and the Alps that can intensely engage all the senses and are increasingly on the minds of the contemporary tourist. Here are a few not-to-be-missed proposals, listed according to the season chosen for one's Big Day. 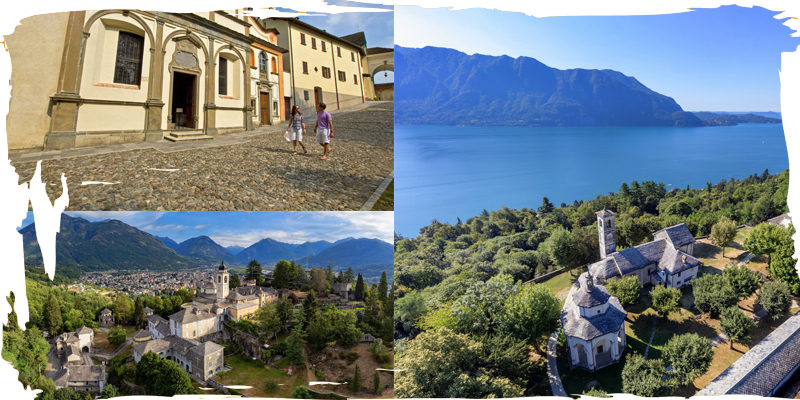 SPRINGTIME ON THE LAKES IN THE "GARDENS OF FEELINGS”
A tour among the villas and gardens "of the heart" of Lake Maggiore and Lake Orta means diving into an experience of slow-paced and conscious tourism. Places where architecture, art and history merge with a world of green and botany, to take home a holiday of intense fragrance. Garden tourism today takes on an intimate dimension, ideal for understanding and enjoying the cultural and natural heritage of the place. The gaze thus turns to small worlds full of poetry: not only the secret corners of villas and castles, but also the flowers and fragrances of lively gardens. The Rocca di Arona Park, a green expanse overlooking Lake Maggiore with the backdrop of the fascinating ruins of the fortress where Carlo Borromeo - the future San Carlo, to whom the colossal 35-metre statue, one of the tallest in the world, is dedicated not far away - was born in 1538. The Pallavicino Park in Stresa, an English-style garden of more than 15 hectares whose avenues extend among flowers, centuries-old trees, ponds and fountains; the park is also home to a precious reserve of animals living in completely natural habitats. In 1632, Carlo III Borromeo commissioned the construction of the palace and gardens that give Isola Bella its fame, conceived as a fantastic vessel moored a few metres from the Stresa shore. In the majestic palace, a succession of wonderful rooms decorated with tapestries, furniture, paintings and stuccoes leads to the coolness of the mosaic grottoes and the grandiose Italian-style gardens, where white peacocks wander among the acidophile plants, citrus trees and rare plant species. On Isola Madre there is an English-style garden with plants from the most diverse latitudes, among which colourful peacocks and pheasants live, while the manor house exhibits "puppet theatres" from the 17th and 19th centuries owned by the Borromeo family. The Alpinia Garden, nestled on the slopes of the Mottarone, allows you to stroll among rocky beds of alpine flora up to where the hillside offers one of the most enchanting views of Lake Maggiore, ranging from the Borromean Islands to the Alps. From springtime onwards, extraordinary splashes of colour transform the Villa Taranto Botanical Gardens in Verbania Pallanza into a floral attraction of absolute excellence on Lake Maggiore: the park displays thousands of specimens of tulips, dahlias, camellias, rhododendrons and azaleas and terraces with sloping pools of water. Also in Verbania are two municipal properties full of charm: Villa Maioni, the current home of the town library, with its park of camellias and tall trees, is a fine example of late 19th-century neo-Baroque style; Villa Giulia, with its beautiful loggia façade and English lakeside park now a public garden, was originally the home of the aristocratic Branca family, inventors of the famous Italian liqueur Fernet. A magnificent flower-filled park guards the romantic Villa Anelli in Oggebbio: this is a private garden where, since the second half of the 20th century, the owner family has passionately cultivated a rich collection of camellias, which in 2010 was named Camellia Garden of Excellence by the International Camellia Society. The UNESCO World Heritage Sacred Mounts, located on the heights of Ghiffa on Lake Maggiore, Orta San Giulio on Lake Orta and Domodossola in Ossola, have 16th-17th century chapels that tell modern visitors, once pilgrims, the story of pivotal figures in Christianity, such as Jesus and San Francesco of Assisi: a unique blend of art, history and spirituality. 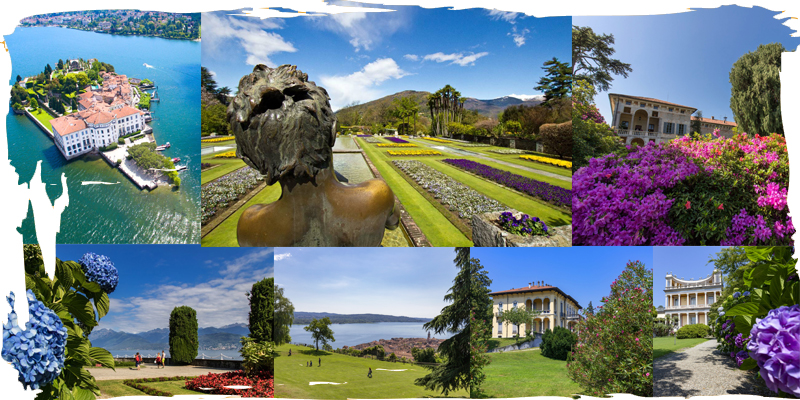 ADRENALINE SUMMER BETWEEN ZIP LINES AND ADVENTURE PARKS
The young summer between lakes and mountains is synonymous with fun and adrenaline. At the Lago Maggiore Aquadventure Park in Baveno, climbing routes, trampolines, paintball, falconry, an educational farm, tennis and padel courts are open all year round, and in summer the facility offers swimming pools, water slides and a lake-view beach. All year round Le Pigne Adventure Park in Ameno on Lake Orta offers courses on bridges, ropes and nets are suspended among the chestnut trees of a centuries-old forest, as well as a Giant Bench built on the top of the mountain, a barefoot sensory path, a tented area along the stream, as well as yoga, Nordic walking and fly-fishing courses! From May to September, the Praudina Adventure Park offers adventure trails and three ziplines among the spruce trees in the pine forest of Santa Maria Maggiore in the Vigezzo Valley. Great fun all year round at Wonderwood, the adventure park in Trarego Viggiona, with its 35-metre suspended course overlooking Lake Maggiore; there is also an area dedicated to our four-legged companions. Steady nerves to experience the thrill of a flight suspended above the blue with the Lago Maggiore Zipline in Aurano (1850 metres at 120 km/h at a height of 350 metres for a total flight of one and a half minutes) and the Lago d'Orta Zipline in Omegna (450 metres at 70 km/h for a total flight of 45 seconds at a height of 60 metres)! Also open all year round is Alpyland, the 1,200-metre roller coaster at the summit of Mottarone, where you will feel like diving into Lake Maggiore from a height of 1,492 metres! 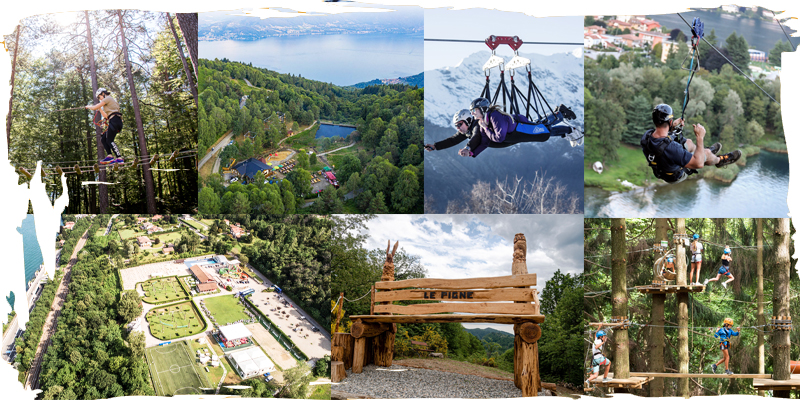 SLOW TREKKING WHEN AUTUMN SETS THE OSSOLA VALLEYS ABLAZE
In September, when the summer is ripe and about to turn to autumn, a walk through the Prünent vineyards runs between the Ossola villages of Masera and Trontano along the gentle terraced slopes with views of the Alps, which have been cultivated with vines since the 14th century and give rise to the indigenous DOC red wine called "Valli Ossolane". A slow path plunges through chestnut woods until it meets the Convent of Corcinesco also known as "di Frà Dolcino", a place shrouded in mystery and the protagonist of many local legends. It then continues to the mills of the Graglia stream, once used for grinding rye, and reaches the picturesque village of Verigo. The entire route is crossed by the famous Centovalli Vigezzina Railway, which connects Domodossola to Locarno in Canton Ticino (Switzerland) through the Vigezzo Valley. Its "Foliage Train" is popular in autumn for admiring the colours of nature among the meadows, bridges, deep gorges and characteristic hamlets of the so-called "Painters' Valley". The walking route touches the stations of Creggio, Trontano and Verigo. The spectacle of foliage is also breathtaking at the Veglia Devero Nature Park, particularly at Alpe Devero, where the larch trees and undergrowth are tinged with the warm hues of the season and can be admired on a pleasant loop walk through the relaxing pastures surrounded by the rugged peaks of the Alps. In a fairy-tale atmosphere, one goes on a discovery of the Lago delle Streghe (Witches' Lake) among junipers, blueberries and rhododendrons, and then explores the beautiful Crampiolo alpine pasture, whose stone huts are grouped around the small 17th-century Oratory of S. Antonio Abate. Here farms and small dairies offer their cured meats, milk, yoghurt and cheeses - a joy of taste! Soon the dirt track becomes a steep path that in just a few metres takes you up to the Codelago dam at 1,856 metres: the grandiose Devero Lake with its turquoise waters appears in front of you. We are in the heart of the park, which is called the "Little Canada" of Piedmont because of its wild beauty. 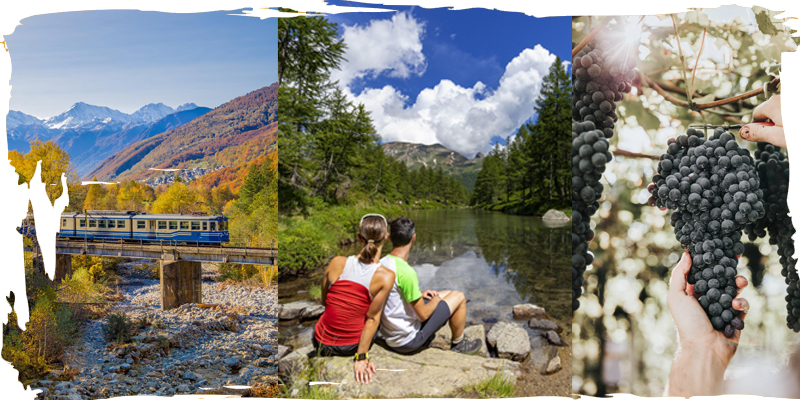 Reception +900
There are more than nine hundred accommodation facilities in this area, characterised by a long tradition of hospitality, high quality services and a valuable event offer. It will be easy for the bride and groom-to-be to be pampered at the luxurious lakeside hotels, the intimate boutique hotels in the surrounding hills or the spa hotels in the mountains. For lovers of the country life, then, there are the holiday farms where you can breathe fresh country air. 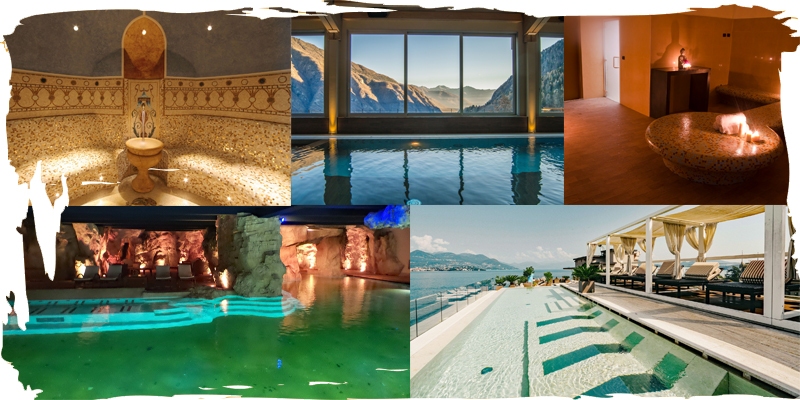 Excellent location
In Alto Piemonte, a very short distance from the Swiss border with Canton Ticino and Valais and from Malpensa International Airport. The big cities are within easy reach: we are an hour from Milan and an hour and a half from Turin. 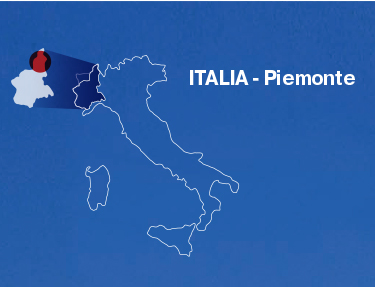 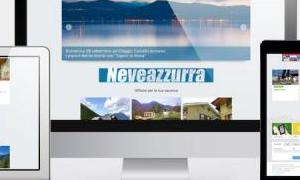