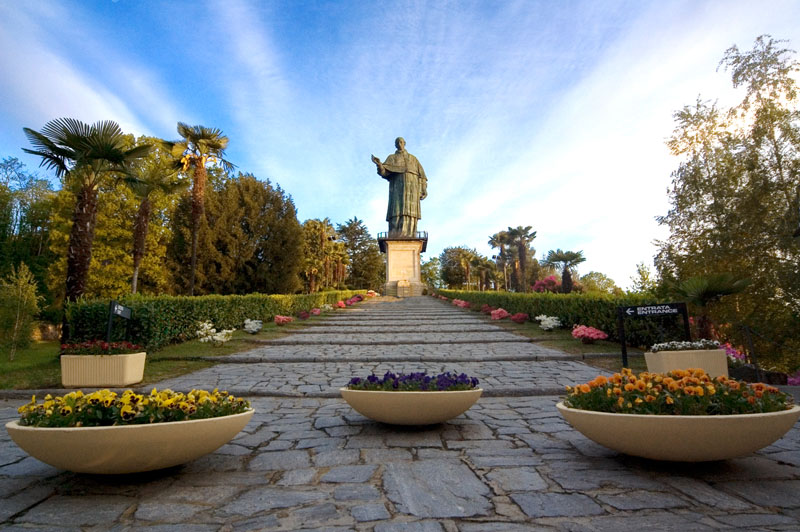 Period
All year round

Road access
To reach the starting point, take the A26 motorway towards “Gravellona Toce”, leaving at the exit for Arona. The motorway exit, about 5 km from Arona, is located at Oleggio Castello, which you must pass through.

Description of the itinerary
Very scenic walk, located in an elevated position above the town of Arona, with breathtaking views. Start from the giant statue of San Carlo, commonly known as the statue of San Carlone. It is an enormous statue (31,88 metres in total) made of copper and granite. The work was completed in 1698 and on 19th May of that year Cardinal Federico Caccia, archbishop of Milan, solemnly blessed the monument dedicated to San Carlo Borromeo (who was born in Arona in 1538 and elected archbishop of Milan in 1565). The statue is open to the public, who can climb up it via a spiral staircase, then a ladder going up into the head of San Carlo. A few metres away is the Shrine of San Carlo, a great, austere, baroque style building dating from the seventeenth century, designed by the architect Francesco Richini. A reconstruction of San Carlo’s original room, obtained by assembling furniture that had been saved from the Napoleonic destruction of the nearby Rocca Borromeo, is located inside (behind the altar). The saint’s relics are conserved in special, carved, wooden showcases beside the altar. Opposite the church is the "Seminario di San Carlo" seminary, now transformed into a school.
Completed in 1640, it was extended greatly during the twentieth century. Continuing the walk, proceed along the length of Via Partigiani for about 1 km and then the Via alla Rocca, which will take you to the Rocca di Arona fortress. Twin of the Borromean fortress in Angera, Rocca Borromea di Angera, (prominently located on the opposite side of the lake), the Rocca di Arona was one of the main points of strategic control of Lake Maggiore in ancient times (it was built in the period just before the year 1000). Over the centuries ownership of the property changed from diocesan administration to the Borromeo and Visconti families, but the story of the fortress ends in 1800 when Napoleon's army was ordered to destroy fortresses occupied by the Austrians. Since that time only a few remnants of the Rocca di Arona remain. Closed to the public since 2002, the Rocca will reopen to tourists and visitors in the summer of 2011, following renovation of the area.