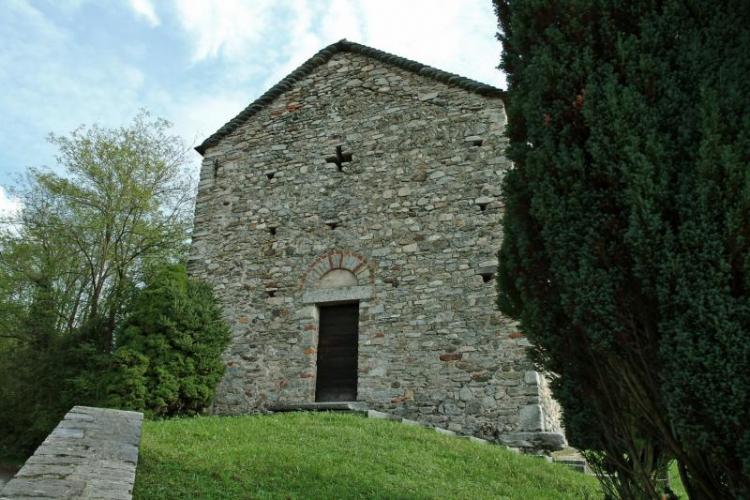 The starting point of the route is the square in front of the cemetery of Gozzano where you can conveniently leave the car.
Take via Madonna del Boggio and at the stop sign turn right toward the centre of Gozzano. Cycle about a hundred meters then turn left again into via 1° Maggio. Now follow the signs for Auzate and climb to the parish church. Shortly after take a path that goes downhill to the River Grua.
Cross the bridge over the river and after a short by very steep stretch you come to Soriso.
At the top of the hill turn left and go down to the intersection with viale delle Rimembranze then continue toward the cemetery of Soriso. On reaching Gargallo and keeping to the right you come to the oratory of San Michele, then turn right uphill along via San Michele.
After the Rio Pergallo where a demanding climb starts, you reach a large unsurfaced area where there is a bulletin board. At this point you must turn left into the woods. Remain on the main path and you come to the tarmac road which connects Borgomanero to Maggiora.
At the stop sign turn left and after passing the bridge turn right into via Baraggioni and the climb that leads up to Colle del Colombaro. At the church of the Sacro Cuore (Sacred Heart) turn left past the Civil Defence Headquarters and you come to the Oratory of S. Bernardo.
Follow the signs to Cascina Convent. At the end of the climb the road becomes unmade and you come to a junction with a chapel in the centre. Turn right and continue straight ahead to the first houses of Barbarana where the road becomes tarmac again. Pass the Cascina Carlottina and turn left following via Castellazzo. After passing the top of the hill you descend on the right and come to Cureggio. Cross the regional road 142 and then take via Cassoli passing under the bridge of the railway line.
Turning right you arrive at the historical centre of Cureggio and follow the signs to Borgomanero. At the roundabout turn right and then immediately left into via Molli: continue passing by the municipal swimming pool and then turn right into via Matteotti. Take Corso Mazzini and you come to the centre of Borgomanero near the parish church and the municipal building.
Go straight ahead along Corso Cavour and then turn right into Viale Don Minzoni. When you arrive at piazzale Salvo d'Acquisto turn right following the indications to Arona.
Cross the overpass and the Fire Station on the right then at the roundabout continue straight on along via Santa Cristinetta.
A few hundred meters further on, near the right bend, turn left into via San Michele.
Continue on an unmade road passing by the Cascina Ghiacciaia and then cycle along via Divisione Garibaldi. Turn right and then right again continuing toward the Cascina Pizzarini. You arrive at the tarmac road in the vicinity of the church of San Tommaso di Briga Novarese and continue downhill to the roundabout. Turn right into via Marconi, heading toward the centre of Briga. After about one hundred metres, turn right and continue uphill on the road that leads up to the top of the hill of San Colombano. Descending the hill again on a steep unmade mule track next to the steps of the church, you come to Piazza Unità d'Italia and turn right following via Sant'Antonio. Climb up to the next junction where you continue left in the direction of Gozzano. Turn into via San Lorenzo and after the church turn left and you come to the forecourt of the cemetery and the end of the route.