a - BIKE - n.4: TOCE CYCLE PATH, cycling through the flowers 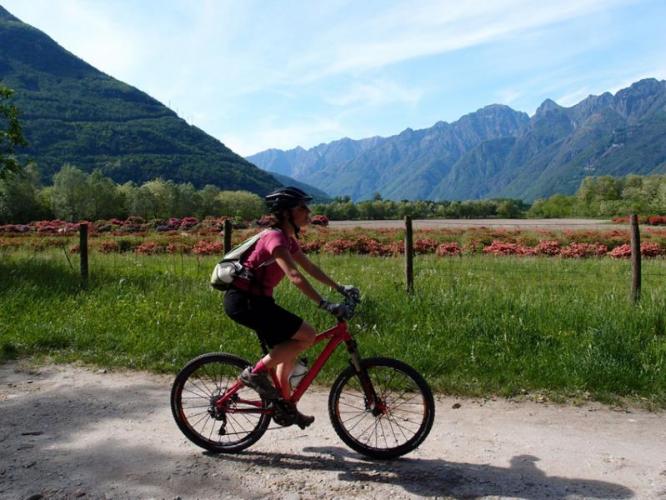 The route starts at Ornavasso and reaches the canebrake of Fondotoce and the railway station of Verbania Pallanza passing through the production areas of "Flowers Typical of Lake Maggiore". Between April and May, in the blooming period, azaleas, rhododendrons and camellias display their infinite shades and tints of colours.
From the centre of Ornavasso the route takes you to the road bridge over the Rio San Carlo and then downhill in the direction of the sports field. From here a nice pedestrian walkway crosses the River Toce and then turns right with a beautiful stretch of cycle path on the left bank of the Toce. The surrounds are very picturesque. The riverbanks have lush vegetation and some stretches of open clearings where flowers typical of the Lake Maggiore are grown. In summer many wild rabbits run off as you pass by. After the turn off for the sports field of Mergozzo, the cycle path finally ends in the vicinity of what used to be an incinerator. From here you turn left into the provincial road from Mergozzo. Turn right and, paying attention to the traffic, follow the tarmac road, after the beginning of Strada Cadorna (road) which rises toward Montorfano (see route 21), and immediately turn right into a wide path that leads under the motorway bridge to the beginning of the network of unmade pedestrian/cycle paths of the Special Canebrake Natural Reserve of Fondotoce (www.parcoticinolagomaggiore.it), an area protected by European legislation. The cycle path continues along the River Toce to the camping area of Fondotoce. Then you continue skirting the canebrake and the canal that connects Lake Mergozzo with the Lake Maggiore and arrive at the roundabout of Fondotoce and the Casa della Resistenza (House of the Resistance Movement). From here a cycle path at the side road leads up to the railway station of Verbania Pallanza.
It is also possible to do a round trip. From the roundabout of Fondotoce set off in the direction of Feriolo, cross the bridge over the River Toce and then take the first right (Via Piano Grande) and follow this until you arrive at the bottom of a large nursery garden with the greenhouses (on the left), turn right and take the cycle path (unmade) on the right bank of the River Toce which leads to Gravellona Toce. You pass near the Due Laghi shopping centre and then keep going to the sports field. From here you follow the provincial road (tree-lined avenue) for about 650 m northward (toward Ornavasso) until you reach the IP petrol station. Here you turn left and take an unmade road parallel to the motorway and pass through a field for flying model aircraft, then you go through the railway underpass and under the motorway and turn right at the roundabout on the provincial road which you cross to take an unmade road which first becomes a wide path and then a new path that skirts the River Toce on right bank (looking downstream) and brings you to the walkway of Ornavasso.

In Mergozzo at the Gelateria Gigi under the porticoes there is bicycle rental point. Info: +39 (0)323 80101 Municipality of Mergozzo.