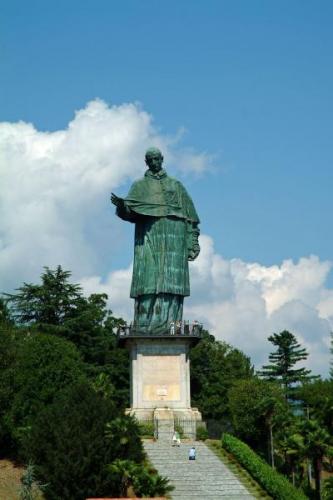 The starting point of the route is at the piazzale Lido in Stresa.
Cycle along viale Lido and then turn left into state highway 33 in the direction of Arona. There is a long flat stretch that runs along the shores of Lake Maggiore. You pass through Belgirate, Lesa and Meina and then on toward Arona. At the end of via Cantoni turn right following the signs for Dagnente, and the statue of S. Carlo. The road climbs quite steeply to the great statue of St. Charles. Continue uphill along via Verbano and at the first junction turn right. Continue climbing to the village of Dagnente. Now you descend in the direction of Ghevio, passing the A26 motorway and climbing again in via Ghevio-Dagnente and then via Meina.
At the stop sign turn right and follow the signs for Gignese. After passing through the town of Pisano the road climbs and then drops for a short distance to Nebbiuno.
Keep going on the main road passing through Massino Visconti and Brovello Carpugnino. After the on-ramp of the A26 motorway at the stop sign turn right into via Gignese and descend in the direction of Stresa through wide hairpin bends where you can enjoy a panorama Lake Maggiore.
On arriving at Stresa, near the underpass, follow the signs for the railway station and the lake. Soon after you arrive again at the beginning of viale Lido which you follow to the end of the route.

To see:Lake Maggiore and the Borromean Islands, the great statue of St. Charles Borromeo in Arona.