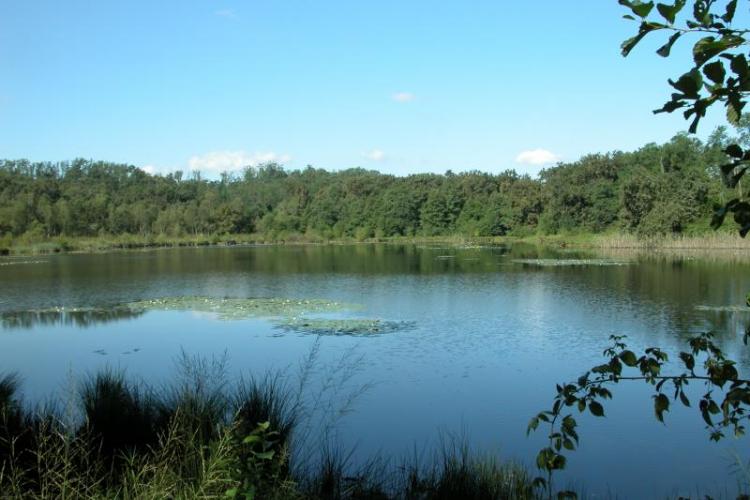 The starting point for this route is at the entrance to the Parco dei Lagoni of Mercurago, where you can park your car conveniently.
Continue along the unmade road that climbs into the woods up to the junction where you turn left along stra of pianel da Gatic and then take the stra di Lagon reaching the large lake on the left.
Keep going on a gentle climb to a junction with a chestnut tree where you continue downhill on the left (to the right there is the stra dal Muntasc) reaching the tarmac road in via ai Lagoni. Turn right toward the village of Dormelletto.
Continue on the tarmac road and before arriving at the centre of the town turn right into via Fratelli Kennedy. At the next junction turn left into via Monte Bianco and enter a long wide cobbled street.
On reaching the top of the hill turn right into via Camotto and continue on an unmade road (stra dal Muntasc) reaching once again the junction with the chestnut tree which you passed earlier. Now you retrace the outgoing route but just before the large lake turn left into the stra d'la Buscarola and continue alongside the riding stables on the right. At the next junction we keep to the right (follow the signs for stra d'la Buscarola), pass the picnic area and a pine forest on the left until you reach a farm in the vicinity of some national grid pylons.
Now turn right into a path signposted senté dal Custon which runs alongside the archaeological area and then cycle along the senté dal Fòs. At the next junction turn left into stra di Sèl then go straight on and return to the stra di pianèl da Gatic.
The path descends to a bend where you turn right uphill taking the senté dal Busch.
Now continue on a flat section, still following the signs for the senté diBusch and you come to the area of the pond. Near the junction with the stra d'la Pül turn right and continue alongside the wetland area to the next junction where you turn right again. After some houses on the left, continue to the right along stra del Bagain and you return to the junction with the small chapel on the outgoing path. Keeping left return toward the exit of the park, the end of the route.