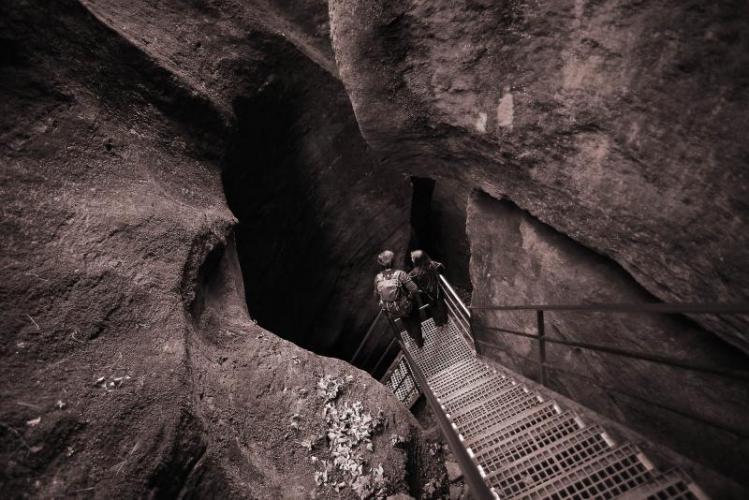 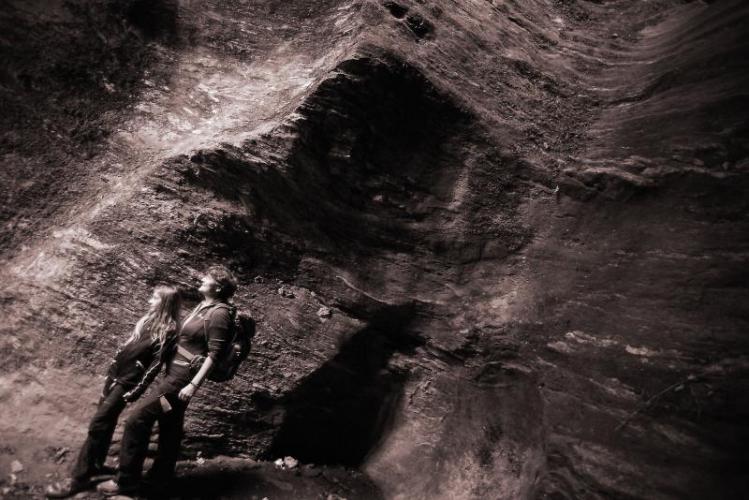 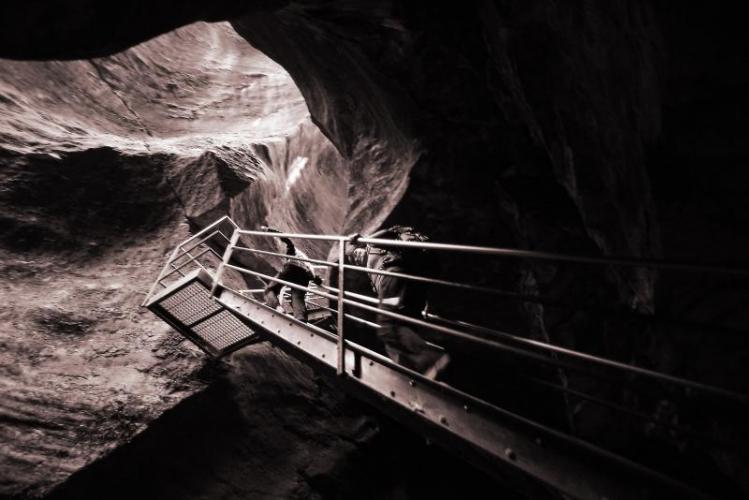 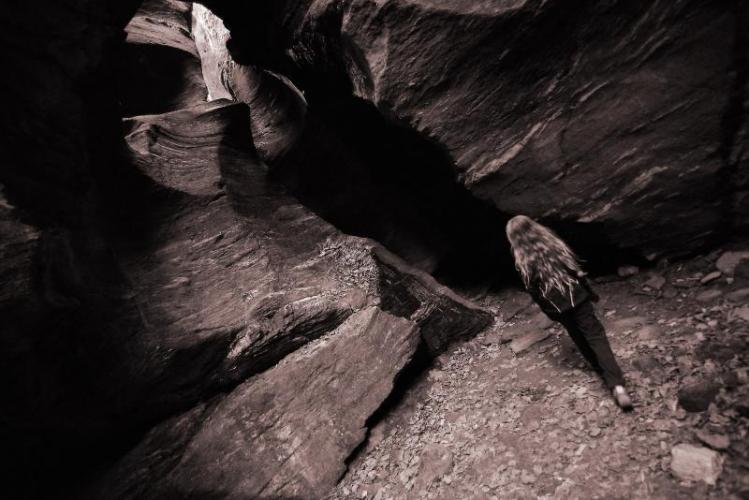 A fascinating journey to the centre of the earth: this is a good title for this beautiful hike that passes through the ravines called Orridi di Uriezzo and also leads to spectacular Marmitte dei Giganti.

Departure and arrival location: Baceno (655 m)
Maximum altitude: Orrido Nord-Est (north east ravine - about 700 m)
Minimum altitude: Verampio (530 m)
Difference in altitude: About 200 m
Distance: 6,5 km
Walking time not counting stops: 2 hours
Type of route: mixed (trail, asphalt, dirt road)
Signs: red/white road signs
Water: fountains in centre of Baceno, others along the path
Recommended period: from March to November
How to get there: it is 20 km from Domodossola. Go towards Crodo and then towards Valle Formazza to Baceno. Car parks close to the tourist office are regulated with a parking disc. It is better to park in Piazza Aldo Moro (at the beginning of the village just after the pharmacy, on the right coming from Domodossola; parking is prohibited on Wednesdays for the street market). By bus: Domodossola-Formazza line, stop Baceno (www.comazzibus.com).
Information: Distretto Turistico dei Laghi - www.distrettolaghi.it; Municipality of Baceno - www.comune.baceno.vb.it; Comunità Montana delle Valli dell’Ossola - www.cmvo.it

From the car park in Piazza Aldo Moro, cross the main road to immediately take via Fornara Francesco uphill (brown sign for "chiesa monumentale" and "orridi"), passing in front of the Fire Brigade (rest rooms) and climbing up to the monumental church dedicated to San Gaudenzio.

Dating back to the 10th century, the church still has a strongly Romanesque layout. It was built on a rocky spur that allows it to dominate from above. The fresco on the façade is a depiction of St. Christopher from 1542 (considered the patron saint of travellers, usually represented in very large size to make it visible from a distance and, often, used to indicate fords and bridges). Inside, saints and nobles have been painted on columns, and there is an impressive fresco depicting a crucifixion. The paintings are mostly from the 16th and 17th centuries (www.chiesa-baceno.it).

Looking at the church façade, take the passage on the left, downhill under an arch (red and white sign for "H00 Orridi di Uriezzo") and pass beneath the impressive stone arches that support the structure of the church, hoisted on the rock. The partly paved mule track leads downhill to converge onto a dirt road that must be followed to the left. In Balmacor, take a right (wood sign), still going downhill, passing in the centre of what was, at one time, a giants kettle. Just beyond a votive pillar, there is a fountain below the rocky wall, and immediately after that the road becomes flatter with a nice section among chestnut trees. At the following fork, take the right path downhill (sign for "Verampio") to go to the left, uphill, to the fork located immediately afterwards (sign for "G34c Orrido e Oratorio Santa Lucia").

Note: memorise this fork because you find it again on your return.

When you arrive at a beautiful isolated house (fountain), go right around the corner of the building and follow a stretch of elevated road (follow the signs for “orridi” painted on the rock) and finally you will reach the hydroelectric power station of Maiesso (fountain). Behind the power station, take the trail (highlighted by handrail) that climbs steeply and then descends gradually in the midst of a beautiful woods made up of broad leaf trees (mainly beech, birches, and alders) and a few fir trees. Once you get to the dirt road, go to the left (sign for "Orridi e Oratorio"). Ignore the staircase to the right and continue straight ahead on the dirt road (the staircase leads to the south ravine (Orrido Sud) - you’ll go there later), crossing a zone of open meadows. Please take the time to make a short detour to the right marked with the sign “Cippo del Partigiano” and “Ponte di Balmasurda 0h05”. At the end of the meadow, you will find a memorial dedicated to the partisan Luigi Fradelizio.

On 30 June 1944, during a transfer, he was shot to death by the Nazis and was not buried for several days. He left a young wife, a 2-year-old daughter and a baby boy just four months old.

Just beyond the memorial, a short descent leads to the bridge on the spectacular Orrido di Balmasurda (gorge) where the water of the Toce river flows impetuous. Go back to the main dirt road, and travels until you reach the asphalt, where it diverts to the left uphill to follow almost immediately a path on the right (sign "Orrido sud-est"). This is where you enter the fascinating world of the Orridi.

What are they? During the Würm glaciation (from 120,000 to 15,000 years ago), the territory was covered by a layer of ice that in this point was estimated to be six kilometres wide and over one thousand meters thick. The surface waters of the glacier melted and created torrents which flowed also very quickly in the layer between the rock and ice, dragging rocks and debris. This action created "holes" (Marmitte dei Giganti or Giant’s Kettle) and deep crevices, today partly dry and practicable (the ravines, “Orridi”). In the area of Uriezzo, there are three distinct ravines: the Orrido Ovest (West Ravine) is less characteristic and exposed, only for experts; the Orrido Sud (South Ravine) that you will see later; and the Orrido Nord-Est (Northeast Ravine) which is about 100 meters long.

The first section is the most beautiful and characteristic, with narrow passages which seem to disappear. Not being particularly deep, the ravine is bright and pleasant, even though it does give you a strong feeling that you are entering a magical world of dwarfs and trolls. A staircase leads to the second stretch, lower and more open, that leads to an exit in a beautiful forest. From here, go back passing through the ravine again.

You can follow an alternative route along the trail in the woods, to the left, that leads to the asphalt road. From here, take a left and return to the starting point.

You can retrace the asphalted road and, if you wish, take a very short detour toward the Oratory of Santa Lucia, built in 1663, already in view. You can retrace the dirt road that you followed to return to the staircase seen previously, and from here, it is possible to descend inside the South Ravine, also called the "trumpet of Uriezzo” (Tromba d’Uriezzo). About 200 meters long, the ravine has narrow passages that alternate with wide rooms while the walls rise as much as twenty or thirty meters in a continuum of suggestions that are difficult to make in a few words. At the end, you come out near a bridge: if you go under it, you will see two small waterfalls; if you climb up the stairs before you get to it, you will be on the dirt road.

If you want to relive the excitement of the ravine, go back through it. Once you get back, the dirt road bends to the left always following the signs for "Verampio", and you will find yourself on top of this bridge.

Continue on the dirt road (towards left when you come out of the bridge stairs) in continuous and constant descent, until you get to a fork. Take the left again (follow the sign for "Marmitte dei Giganti") and in a short time you will come to a bridge over a stretch of the Toce River where a long time ago, most of these geological formations formed (fountain).

Carefully (the rock can be very slippery: Caution!) you can descend to the edge of the water, but watch lively children closely because too lively since the current is strong. Better to stay at the "conche", the smaller and quieter points.

Admire the Giant’s Kettle, and then dirt road going back up to the fork (signs for "Verampio") and, always going downhill, you will reach the first houses of this village. Cross a ford and take a right (sign for "Baceno"), passing between some homes on a grassy track that leads to a humpback bridge (sign for "Baceno Chiesa"). After you pass that, you will start to climb along a path that is partly cobblestones (slippery if it rains). The climb is continuous and marked, and passes through a small abandoned village with a small oratory, a trough fountain and a building with a fresco. You will reach the fork that you passed through previously (see the first “note” above). From this point, you can retrace your way back on the trail that you took at the beginning of the walk to return to the monumental church of Baceno.

Croveo, the "torchio" and "marmitte"
In Croveo, a hamlet just above Baceno, you will find an ancient “Piedmont-style” lever wine press ("torchio") with a beam 8 metres long. It was recorded in the history books as early as 1860, but it was probably already present before that because the beam is engraved with the date 1766. It was private property, but was used by the whole community, and it represented a meeting point because it took eight people to manoeuvre it. They took turns alternating two teams of four at a time. The term “torchio” not only indicate the actual wine press, but the whole building, which also houses a millstone. Once used to process apples, nuts, and hemp, it was also used in squeezing a now extinct type of pear, the “pir”, a tart fruit that was not really pleasant. The juice of this fruit was used to make a sort of sweet wine, the "vino di pir" (probably similar to the current French “poirè”, a cider made from actual pears).
Croveo is also the location of the Marmitte di Croveo, geological formations similar to the Giant’s Kettle that are visible from the stone bridge. They can be reached in 5 minutes by foot, starting from the central square.

Pushchairs and strollers cannot go inside the ravines because the trail is not level and there are metal stairs. This hike can be very muddy and slippery in case of rain.