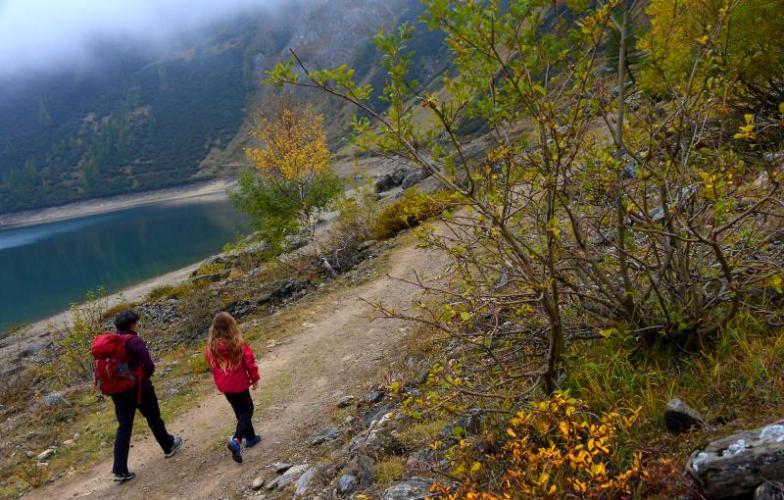 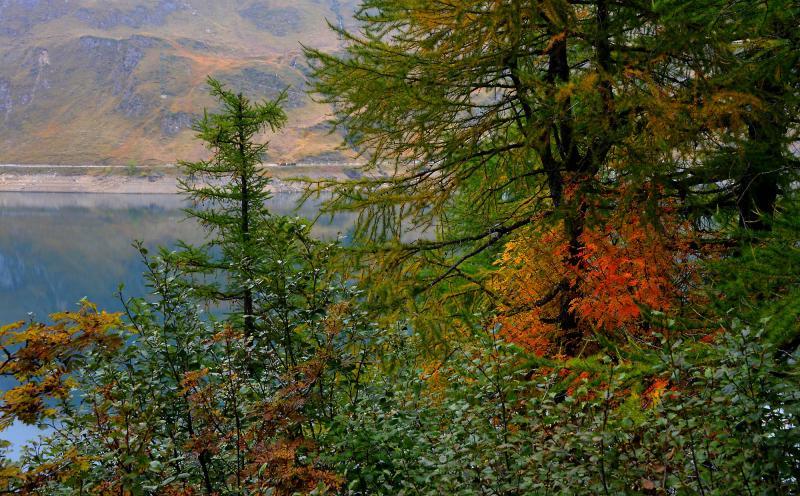 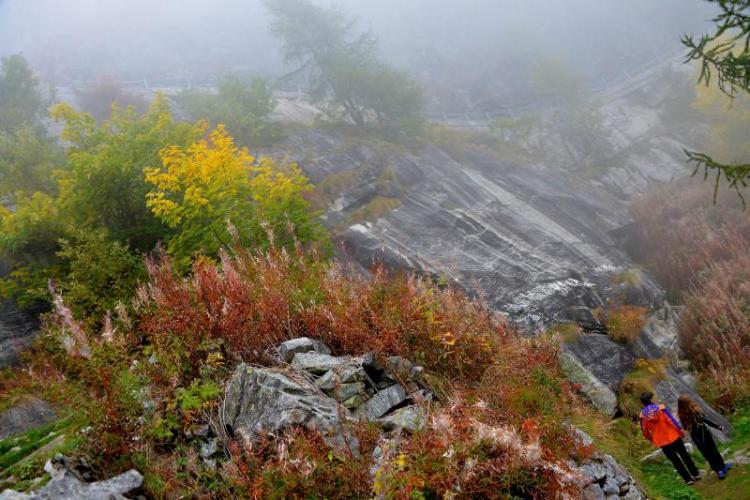 A ring-shaped walk along the shores of Lake Morasco, in a fascinating alpine environment, and then a peaceful stroll through the bucolic pastures of Piana di Riale.

Departure and arrival location: parking areas at the base of the dam (1747 m)
Maximum altitude: the south shore (about 1850 m)
Minimum altitude: Riale (1734 m)
Difference in altitude: about 150 m
Distance: 8,5 km
Walking time not counting stops: 3 hours
Type of route: mixed (trail, asphalt, dirt road)
Signs: G00 red/white signs
Water: fountains in Riale
Recommended period: from May to October (from November to April it is a cross country skiing track)
How to get there: 50 km away from Domodossola. Go towards Crodo and then towards Valle Formazza to Riale. The SS659 ends there. A car park and camper area are located at the foot of the dam. The cost is 3.00 Euro per day in high season. Just down the valley from Riale, there is some free parking, 2 hours with a parking disk. By bus: Domodossola-Formazza line, stop Riale (only in July and August, in other seasons it stops at Ponte di Formazza) (www.comazzibus.com).
Information: Distretto Turistico dei Laghi - www.distrettolaghi.it; IAT Office - loc. Ponte, Formazza - tel. +39 (0)324.63059; Municipality of Formazza - www.comune.formazza.vb.it; Associazione Turismo Commercio Formazza - www.valformazza.it; Comunità Montana delle Valli dell’Ossola - www.cmvo.it

The hike starts from the plain of Riale, a village belonging to the municipality of Formazza that can boast of being the most northern part of Piedmont. In fact, Val Formazza is the extreme offshoot of this region, a peg stuck right into Switzerland that is connected through the Gries mountain pass (2479 m). Precisely from this road during the 12 century came the Walser population from Canton Wallis, who settled in the valleys next to Mount Rosa, between Piedmont and Aosta Valley, with their distinctive culture that they maintained almost until the present times. From the large car park adjacent to the camper area (10 € per day, inclusive of electricity and water, loading and unloading waters), take the asphalt road on the right that goes uphill towards the top of the dam ("G00 Lake 0h15” sign).

The Morasco dam was built between 1936 and 1940. It feeds the Ponte power station and produces sufficient energy for 30,000 families. When it was built, the lake submerged the village of Ponte, which was built here in the 15th century.

If you stay on the road, the uphill climb is gentle and gradual, but you can also use the trails that "cut" a more direct path up the steep curves, shortening the distance. When you reach the top of the dam, on which it would be possible to walk, continue along the dirt road that winds flat alongside the lake, and keep the water to your left. You will find a metal footbridge over the water where the lake narrows Unfortunately, it is not accessible because it serves as a winter passage for the dam personnel. You’ll have to continue on dirt road and be careful. Just a short distance ahead, you can abandon the "G00" road for a trail to the left that leads down to the bridge on the Rio Gries. After crossing the bridge, the path starts to climb up to the buildings of the electrical power plant, where it then flattens back out to become a pleasant mule track. This path winds around the western and southern sides of the lake and returns to the dam. Here, there would be a path that goes directly to the buildings below, but at certain times when vegetation is thick, it is difficult to interpret. It is better continue beyond the dam on the more obvious trail and then bend to the left and descend gradually on the dirt road that passes next to some alpine pastures where the well-known cheese Bettelmatt is produced. The road will turn to asphalt, and it leads to a refuge. From the refuge, continue on asphalt up to return to the parking area. Now, continue on the asphalt road to the village of Riale, a pleasant deviation amid the large flat pastures. After passing the building where a restaurant-inn is located, walk into the hamlet amid the houses to the left, and you will come to a small white church (fountain). If you look carefully at its façade, you will see how deep the snow was in 1951. Amazing!

As you can see from the signs in the vicinity of the village, you are now on the "Sbrinz-Route" (also known as the "Via del Gries"), a path 150 km long that goes through the Gries Pass to connect Lucerne and Domodossola. Every year in August, a parade takes place to commemorate this ancient trade route, with participants in costume and with horses and mules.

Cross the hamlet with its beautifully renovated homes (fountains), and climb to the right along a path that shortly leads to the top of the hillock where the Oratory of S. Anna stands. This 19th century building was erected in memory of the little church of the village of Morasco, submerged by the waters of the dam. The path goes back to the asphalt road that you will then follow back to your starting point.

Gastronomy: cheese…
Bettelmatt is a cheese obtained from processing the milk from only one milking, mainly produced by Bruna Alpina cows, ripened for a minimum of two months. The forms weigh 4-6 kg, and have a smooth crust, compact consistency and a soft colour ranging from yellow gold to straw and bird’s eye holes. The cheese is produced between the first of June and the beginning of September in just seven Alpine pastures in the Formazza and Antigorio Valleys, located between 1800 and 2400 m: Morasco, Kastel, Val Toggia, Vannino, Poiana, Forno and Sangiatto. Records seem to show that it was already known in the 13th century and that the name derives from Walser word bettel (collection, in the sense of begging for alms) and matt (pasture), hence "pasture of the collection", and they were normally used as commodities to exchange or as payment. Other delicious cheeses from the area include Formazza (fresh or aged), Formazza Blu (blue cheese), Sümmer (only made in summer from milk from cows that eat only fresh grass).
…and potatoes
A basic food for the mountain inhabitants for centuries, the following varieties are available: Pomater Häpfa (yellow flesh and reddish skin), Walser (yellow flesh and skin) and Occhi Rossi Roti Öigje (yellow flesh and skin, with red eyes).
The Toce Fall
You cannot climb to Riale without admiring this waterfall which, being 143 meters, is one of the highest in Europe. It was mentioned by many illustrious visitors such as Richard Wagner, Gabriele D'Annunzio, Queen Margherita, King Vittorio Emanuele III and Giosuè Carducci, just to name a few. At an altitude of 1657 m, it is easily visible from the road from Formazza to Riale, just two kilometres before the town. From the large car park, it is easy to walk to the wooden footbridge suspended over the falls, though best view is no doubt along the downhill path that runs alongside it, following a part of the track of the Via del Gries/Sbrinz-Route trail (0.7 km -150 m up to the bridge over the Toce, then you need to go further up; alternatively, from the bridge, continue up to the village Sotto Frua - where there is a power plant and an interesting Salesian chapel dedicated to the Santa Madre dell’Esperanza. You can return by bus (www.comazzibus.com). Unfortunately, since it is used to produce electricity, the waterfall is not always at its maximum strength and so, we could say that it has opening hours (www.comune.formazza.vb.it). The hotel that often appears in the photos near the waterfall is located near the parking lot and dates back to 1863. Its present appearance was achieved around 1926.
Casa Forte - Steinhause
In the hamlet of Ponte, just before the power station, we find the located the austere building called Casa Forte-Steinhause, or "Schtei hüs” (stone house). Built in 1569, it was a garrison and a check point for goods in transit along the Swiss Route. Today, it houses an ethnographic museum with objects linked to transportation of goods by pack animals (horses, mules and donkeys), storage and stocking of goods, and furnished rooms (for opening times www.comune.formazza.vb.it).

About half of the walk around the lake is accessible for pushchairs (from the car park to the dam and along the northern shores up to the power station buildings), as well as the stretch from the car park to the village and the trail that goes up to the refuge. However, pushchairs cannot travel on the section that goes from the power station buildings up to the dam (western and southern side of the lake).