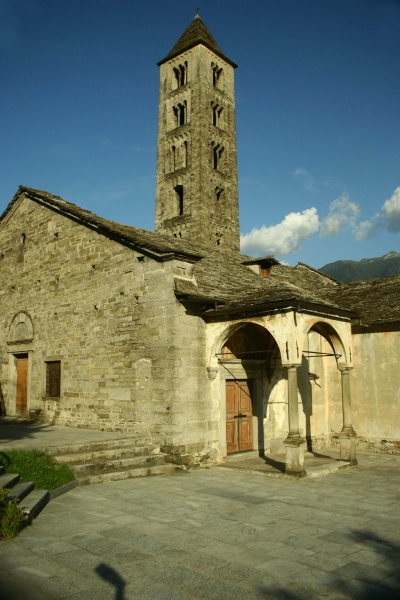 This originally Romanesque church, dating back to the 10th and 12th centuries, is located at the entrance of the valley known as Valle Antrona, outside the town of Villadossola, on the left-hand bank of the Ovesca stream.
St Bartholomew's Church as it is today, results from a long series of works lasting from the 14th to the 20th century and only the upper part of the side walls, the eastern side with its semicircular apse and the bell-tower remain of the original structure. The walls consist of squared blocks arranged in regular courses and decorated outside by means of pilaster strips, slender half-columns and rows of hanging arches. Some fragments of 15th century frescoes still exist in the apse.
The church is decorated with numerous interesting petroglyphs. On the main door there is a central cross with two Greek crosses either side carved together with symbols of the sun and serpentiform motifs. Near the rose-window and in several locations of the outer walls, you will note other panels with carvings of different nature, that can be referred to three basic decoration types: tree-shaped with branches, semicircular with raised radius and two tiny symbols of the sun inside, and St Andrew cross with two horizontal lines under it.
These panels may not be very ancient and have been carved by local stone-dressers, possibly to distinctively mark their work. In any case, such a high concentration of petroglyphs in one site should be considered unusual.