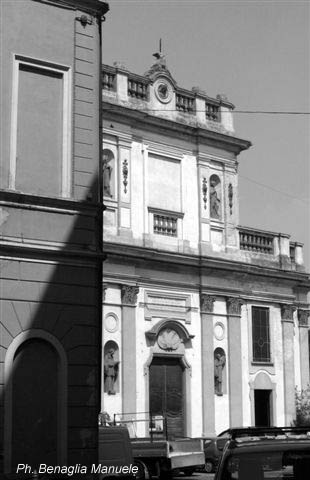 The present church dedicated to Saint Anthony the Abbot was built between 1765 and 1775 after demolishing the previous church, which dated back to the end of the XV century. The name of the author of the façade is yet unknown. The two-storied façade characterized by two terracotta statues was realized in 1875 by architect Ercole Marietti who also supervised the restoration of the inside of the church. The stuccoes were alternately realized by Giovanni Gianoli of Campertogno and Giacomo Grosso, while the paintings were made by Paolo Maggi, Mosè Turri, Pietro and Pompeo Ramella Sperati. Inside the church there is an altar dedicated to the Blessed Virgin Mary of the Rosary. The altar was taken from Saint Mary of the Scala in Milan, demolished in 1776 to construct the theatre. Of great interest are two well preserved paintings by an unknown author, the one depicting the Passage of Saint Anthony the Abbot, the other Saint Serafino, Saint Anthony of Padua, the Virgin Mary with the Baby Jesus, a saint and some flying angels.