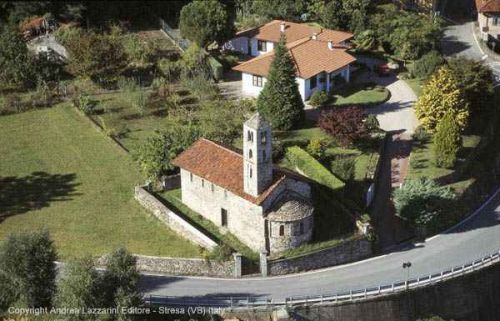 The small church dedicated to Saint Sebastian stands in a dominant position on a hill outside, along the road leading to Massino Visconti. Documents on some of the chapel dating from the end of the thirteenth century, although its construction is due to 1100-1125, for the particularities of masonry structures. It 'a single aisle with semicircular apse oriented, and the facade is a hut. Very particularly the structure of the tower: incorporated in the masonry, rests on two pillars placed inside of the building and shows three orders specchiature decorated with hanging arches. The openings are different between them, in order first appears close to monofora slot in the second with a monofora archivolt and third with a double lancet window archivolt cigliato. The abisde is decorated with hanging arches irregular groups of five and divided into three pilasters, with many windows splayed. Was the opening cross placed on the wall above the apse, which, inside, is a gauge frescoed Light of Christ-flanked, down by two sheep.