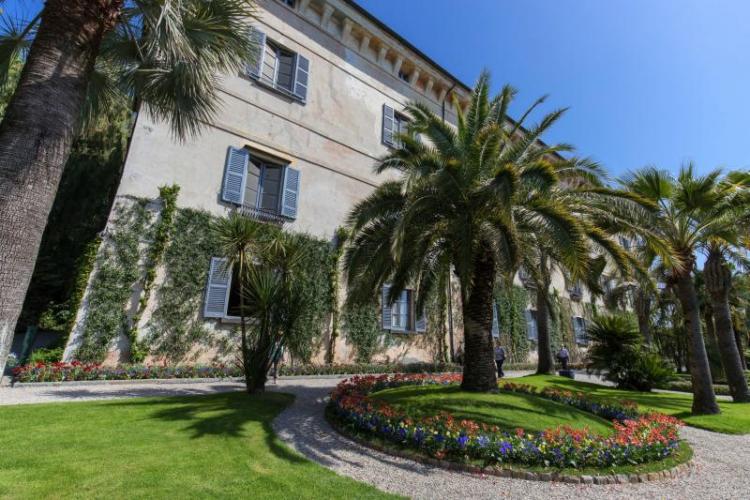 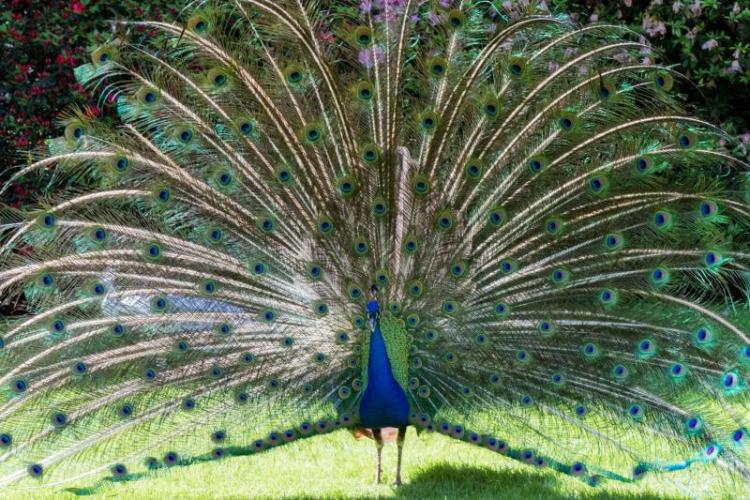 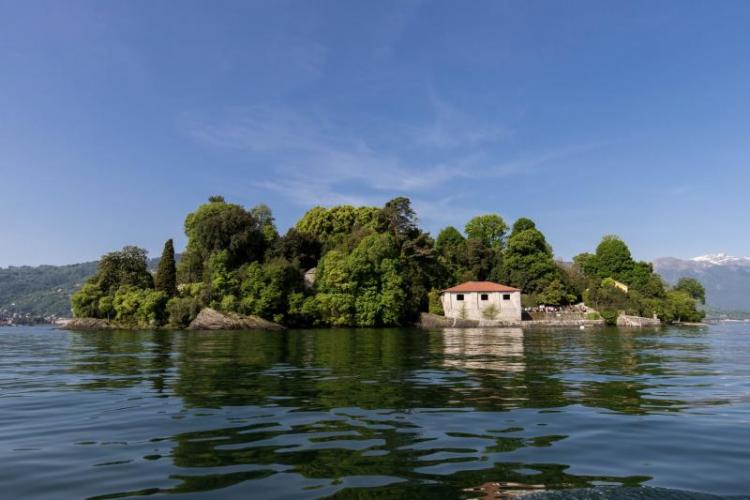 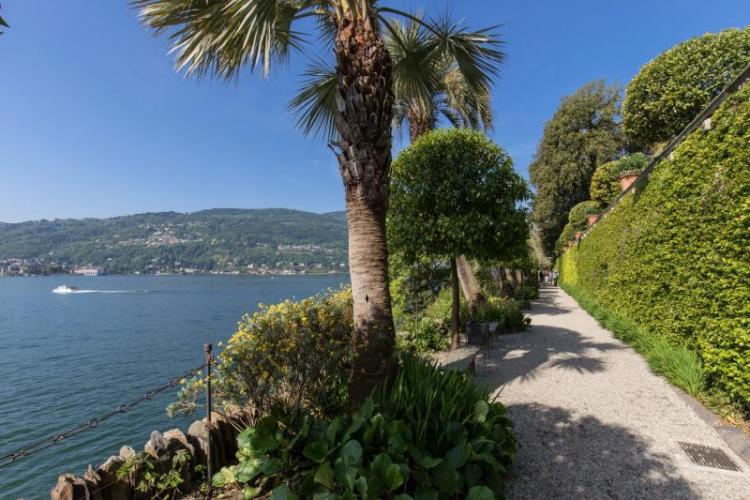 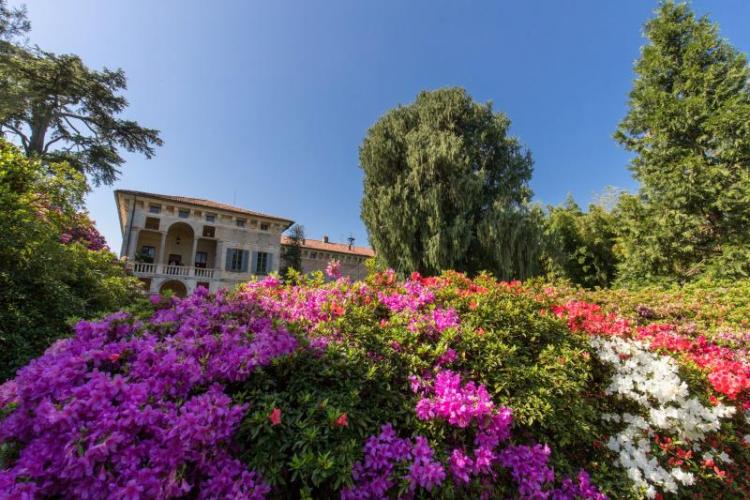 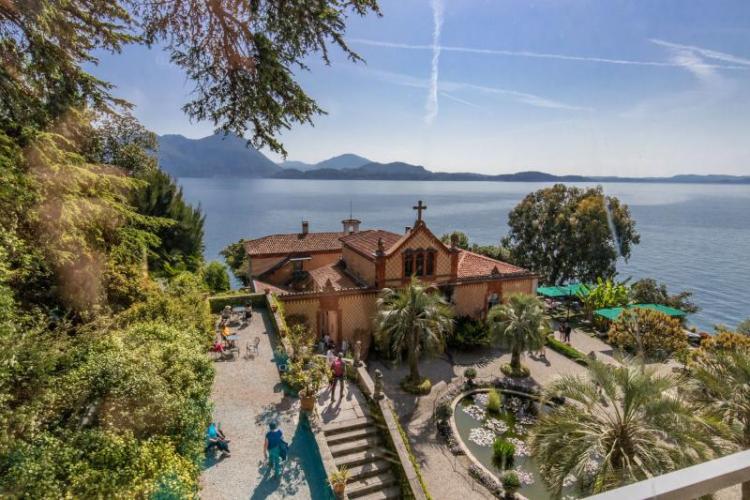 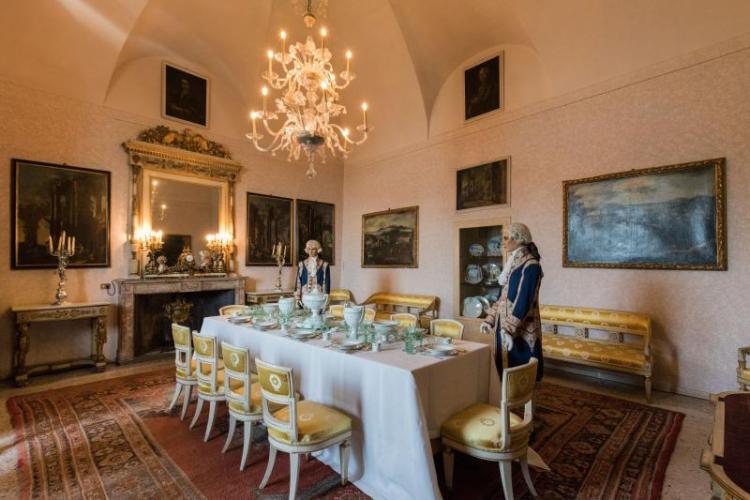 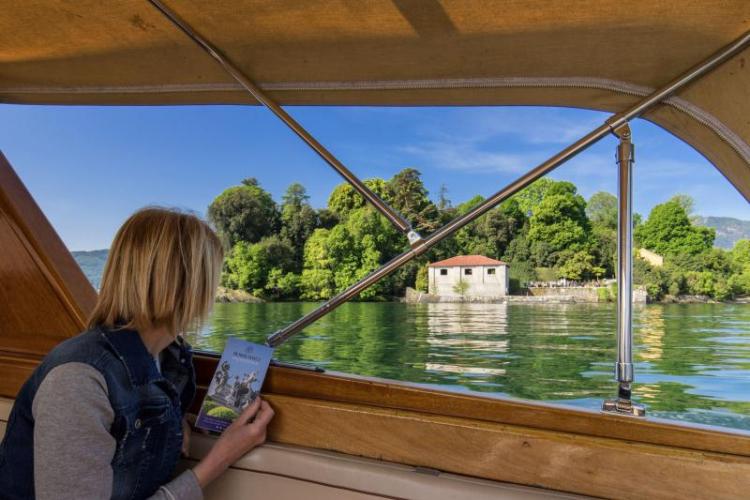 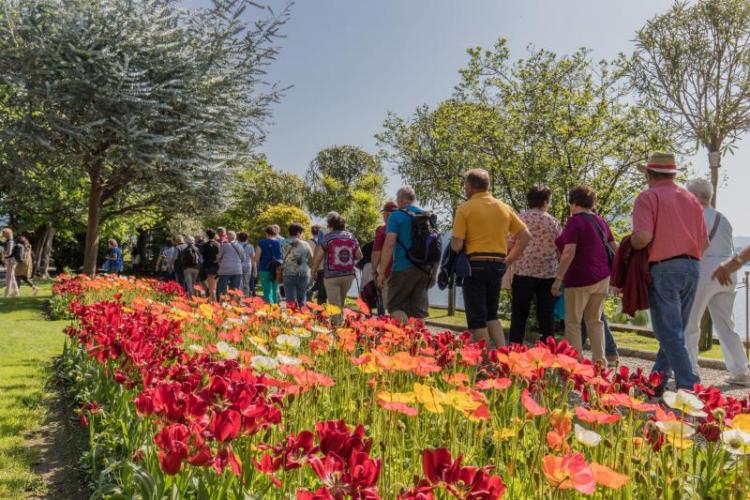 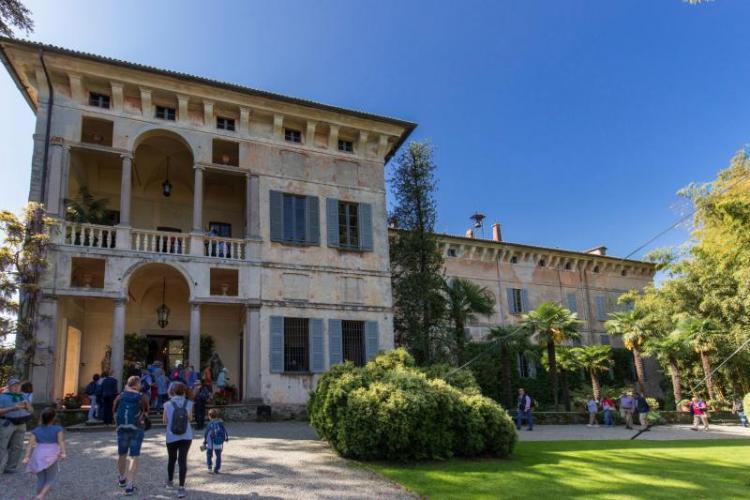 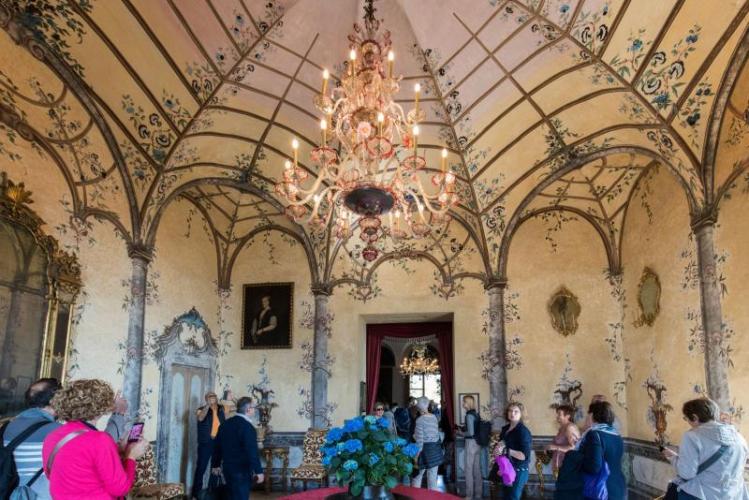 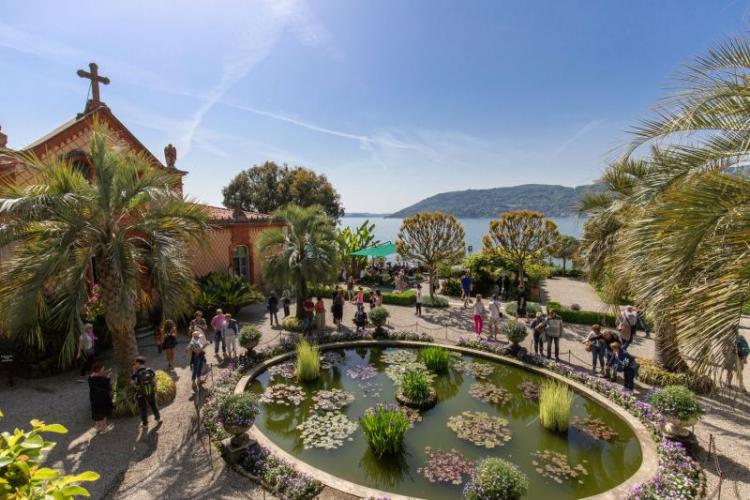 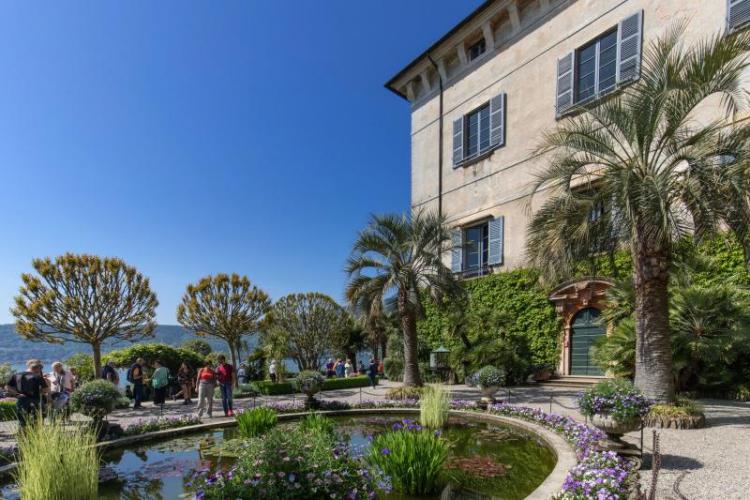 From the bare rock of the glacial era it resurfaced in history in the year 846 as an islet with a few houses, a small church dedicated to San Vittore, a cemetery and some olive plants used in the liturgies.

During the medieval age, the Island of San Vittore belonged to various owners (abbots and bishops) and it was only in 1501 that the document appeared that ratified the passage of ownership from the Bishop of Novara to the noble Lancillotto Borromeo.
Through marriage, the Island of San Vittore was transferred in 1520 to the Trivulzio family, and it was only in 1563 that Renato Borromeo regained possession of the property, to which he gave the name Isola Renata. New impetus was given to the construction of the Palazzo by calling on Pellegrino Pellegrini, known as Il Tibaldi, a key figure in Lombard culture and the trusted architect of Carlo Borromeo, Archbishop of Milan. The late 16th-century appearance of the Palace that we still see today dates back to this period. The gardens progressed significantly thanks to architect Filippo Cagnola, who in 1710 immortalised staircases, pergolas and vases with great precision.
At the end of the 18th century Isola Madre had taken on the appearance that is substantially conserved today, and it began to be considered a place of peace and repose thanks to its mild climate and luxuriant nature. Subsequently the greenhouses (1826) and the family chapel were built, the latter at the wishes of Vitaliano IX starting from 1858 by architect Defendente Vannini.
In the early 20th century came the idea first of transforming Isola Madre into a hotel, and then of renting it out privately to a very select clientele. But it was Giberto and Bona Borromeo Arese who defined the future of Isola Madre between the 1960s and 1980s: the Palazzo (sumptuously furnished with furniture and works of art coming from Villa Borromeo Arese in Cesano Maderno) and the vast gardens were made available definitively for the enjoyment of the public.

Palazzo Borromeo: in the Palazzo on Isola Madre the choice has been made to give precedence to the private dimension of the family.
The style is elegantly sober: a succession of loggias and rooms, furnished with tapestries, furniture items and paintings coming from various historic dwellings owned by the Borromeo dynasty in Lombardy.
Among the most important rooms: the Salone di Ricevimento [Reception Room], the Sala delle Stagioni [Seasons Room], the Salotto Veneziano [Venetian Lounge], the Library, the Sala delle Battaglie [Battles Room] and the Sala dei Papi [Popes’ Room].
Porcelains and liveries, family paintings and canopy beds decorated with sumptuous brocade compose a fascinating fresco of courtly life. Everywhere, from the loggias or from the large windows, it is possible to enjoy charming views of the lake and the botanical park.

A heritage that presents a unique cultural insight

The marionette theatre
Stage sets, designs, marionettes, entire scripts, musical scores, payment receipts: a genuine home puppet theatre where the Borromeo family entertained their guests. From the mid-17th century onwards the performances involved members of the family, friends and the servants themselves. The collection exhibited is among the most extensive and best conserved in the world. The creator of the sets and backdrops was Alessandro Sanquirico, scenographer of the Teatro alla Scala in Milan, who worked for the Borromeos in around 1830. Together with the marionettes, also on display are various mechanical devices that were used to create fog, fire and stage noises: the special effects of over two centuries ago.

The Venetian Lounge
When you enter the Venetian Lounge, positioned at the sunniest point of the building, it will seem like being under a pergola supported by columns interwoven with plants and flowers.
Mirrors, Murano chandeliers and furnishings recall the taste of the Serenissima.
A perfect, sophisticated trompe l’œil enchants visitors.

The English-style garden:
With its eight hectares of expanse, it is the largest of the Isole Borromee.
The botanical heritage and the strong exotic impression have made it what Gustave Flaubert called “the most voluptuous place I’ve seen in the world”.
The current English-style botanical park was created in the early 19th century and since then it has been the abode for plants and flowers brought back from trips to far-off lands and acclimatised thanks to the mild and favourable temperatures.
Today the garden on Isola Madre is unique for its rare plant species from every part of the world.
Continuous, exuberant flowering, the result of the endeavours of expert gardeners, continually renovating every corner of the park: from the magnolia groves to those of bamboo, from the perfumed pergolas of wisteria to the espaliers of citrus fruit, from the parterres of ancient camellias and rhododendrons to the overflowing pools of waterlilies and lotus flowers. Eucalyptuses, palms and banana trees coexist with the collection of conifers and maples. At the height of summer ibiscus, morning glories and bougainvilleas bring out the emotion of a trip through time.
Completing a setting of such harmonious beauty are multi-coloured birds roaming freely in the park. Silver and golden pheasants and white peacocks walk in tranquillity on the lawns and among the hedges.

A unique botanical collection
The proteas are unmissable
The mild climate has allowed the establishing of amazing flora hard to find in other locations: rare plants coming from the most diverse latitudes and spectacular blooms make it a real earthly paradise. The terrace of proteas is unique; these are prehistoric flowers that are the emblem of South Africa, found here in their ideal environment.

The history of the cypress from Kashmir
Providing shade for the Palazzo is the imposing cypress from Kashmir, which arrived here in 1862 from the Himalayas in a bag of fresh seeds and which over the years has become a symbol of Isola Madre.
It is the largest, oldest specimen of its kind that in Europe; in its land of origin, Tibet, it is in danger of extinction.The whirlwind that hit the north of Isola Madre in June 2006 also left its mark on this huge tree.
Saving it has been an operation involving complex engineering and botanical skills. Even if it will never return to the shape that made it «the most beautiful tree in the world», the great Cypress of Isola Madre remains to provide evidence of the devotion of the Borromeo family to the conservation of the island’s natural heritage.
Since 2002 the gardens of Isola Madre, along with those of Isola Bella, have been part of the prestigious Royal Horticultural Society.